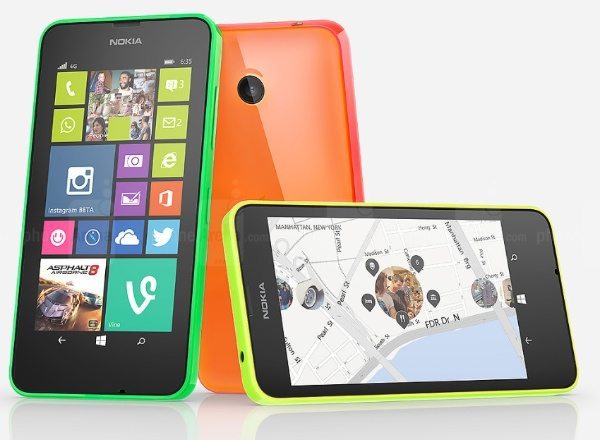 The Nokia Lumia 635 smartphone is a new Windows Phone device to the market. This has some decent specs and an affordable price tag and is now available for sale at UK retailers. However, it emerges that the Nokia Lumia 635 price for the UK is higher than elsewhere.

Last month we informed readers that the Lumia 635 was up for pre-order at UK retailer Unlocked Mobiles with a SIM-free price of Â£144.98 and stock due from July 3rd (today). The phone is now also available without a contract from Carphone Warehouse where it’s priced at Â£129.95 with a Â£10 top-up on PAYG. Alternatively it can be purchased unlocked from Clove at Â£149.99. All of these retailers now have stock of the phone.

This is competitive pricing for an LTE-capable phone and in fact it’s the cheapest LTE Windows Phone handset available, but it still costs more than for some other regions. For example the cheapest of these UK prices equates to around $222, but the Lumia 635 will soon be available in the US for just $99 unlocked, so UK customers will be paying the equivalent of more than double the US price. In India the price is expected at around Rs. 10,000, roughly equating to Â£98.

If you’re in two minds whether to buy the Nokia Lumia 635 you can check out more about it in our other articles here, but as a refresher on specs we can tell you it has a 1.2GHz Snapdragon 400 quad-core CPU, Adreno 305 GPU, a 4.5-inch display with 854 x 480 resolution and 218 ppi, 512MB of RAM, and 8GB of internal memory that can be expanded to 128MB via microSD. Further Lumia 635 specs include a 5-megapixel rear camera with 720 video recording capability (but no secondary camera), and a 1830 mAh battery. It supports 4G LTE and runs the Windows Phone 8.1 operating system.

Have you already decided to buy the Nokia Lumia 635? What do you think about the price being so much more than in the US?