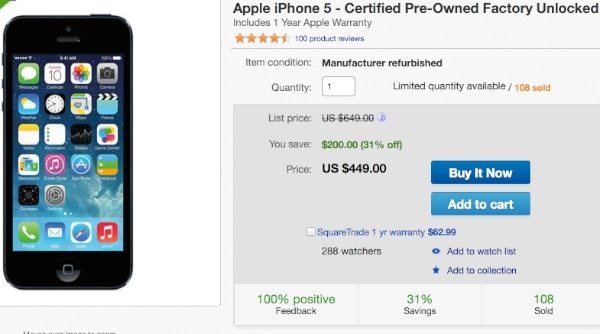 Apple has previously partnered with eBay on a factory outlet store selling refurbished Apple products, and now we have details of a further Apple refurbished iPhone store on eBay. This appears to be a low-profile store selling Apple Certified refurbs that come with cheap prices and full Apple warranties lasting for one year.

The store front for the Apple eBay store was recently uncovered and several models of the iPhone 5 are currently listed. For example a 16GB iPhone 5 certified pre-owned factory unlocked GSM phone in black or white is available for $449 (a saving of $200) while a 32GB model in black has a price tag of $479 (a saving of $270).

While there’s nothing on the storefront that indicates direct Apple involvement, it does use the same language as used previously, when refurbished iPads were sold in an Apple and eBay teaming. For example the 1 Year Apple Warranty, the fact that the devices have received complete burn-in testing, and also a final quality inspection by Apple.

We’re not exactly surprised to see this latest development given that an Apple Certified Refurbished Products Store for iPads was launched last year on eBay, that then vanished before new iPads arrived. With the iPhone 6 expected in fall it makes even more sense, as it’s another way that Apple can push out existing devices, and it’s possible that more pre-owned devices will be added to the new Apple eBay store (link below).