Micromax Canvas A093 price in India 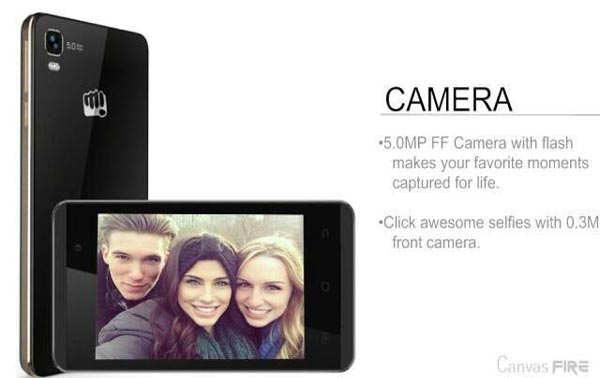 The Micromax Canvas A093 with an expected Rs. 6,299 price in India has appeared online once again. The previously mentioned name is what we believe this smartphone will be called, from reports at Mahesh Telecom, although the price mentioned hasn’t been confirmed by any official at Micromax just yet.

Insiders at Mahesh Telecom normally predict future prices without mistakes, so the Micromax Canvas A093 price for India will most likely be correct. We’re hearing the colour combinations will include White with Silver, Black with Silver, White with Gold, and Black with Gold. You can see the tweet from Manish Khatri at Mahesh Telecom below, so feel free to reply to this on Twitter or leave a comment below this article.

Rumored specs for the Micromax Canvas Fire A093 include a 1.3 GHz quad-core processor, 4-inch IPS display, 1750mAh battery, external storage up to 32GB with microSD, FM Radio, Dual SIM with dual standby, and also a 5 megapixel rear camera with LED flash and a 0.3MP camera on the front. There’s a number of other standard features like GPS, Bluetooth, WiFi b/g/n, and more.

This smartphone will run on the Android 4.4 KitKat operating system and is expected to receive updates pretty much like the other Micromax phones.