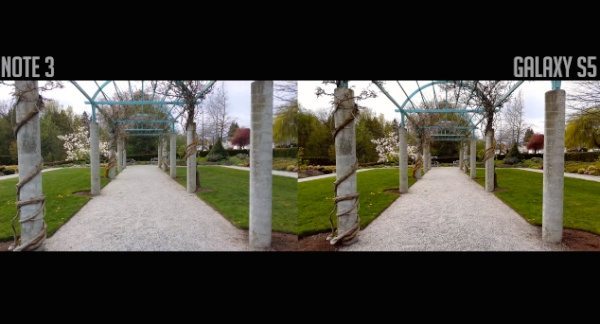 There are a growing number of phones that capture 4K video and two of those are Samsung handsets. Today we’re sharing a Samsung Galaxy Note 3 vs. Galaxy S5 4K video review, to give you an idea of the quality of video and how the devices compare in this respect.

Before we get to the video we’ll recap you on the camera arrangements for each device. The Galaxy Note 3 has a 13-megapixel rear camera with autofocus, LED flash, and image stabilization. Video capture is 2160p@30fps or 1080p@60fps (models vary), and it also has a 2-megapixel front-facing camera.

Below this story we’ve embedded a YouTube video for you to view that shows 4K videos taken with these phones. You’ll see some outdoor video footage taken with each in a variety of locations, and also footage shown on a split screen for easy comparison.

The video then goes on to show some indoor recording, including a quick auto-focus test, and the option to hear audio quality. Finally some video clips taken in low-light conditions are shown. Overall, this 4K video review will give you a good opportunity to see how the cameras of these phones compare.

We often find with camera tests that views from readers can vary greatly over which one offered the best results, and we’d be interested to hear your opinions with this Samsung device test. Do you think it was the Samsung Galaxy Note 3 or the Samsung Galaxy S5 that captured the best 4K video footage? Drop us a comment to let us know.