HP working on a high-powered Tablet called the HP Red 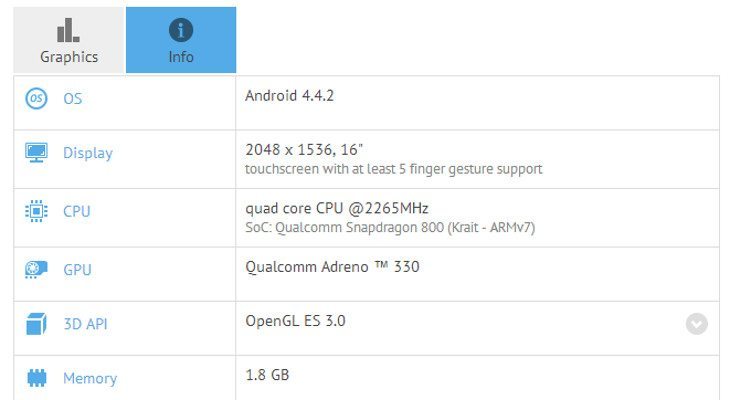 Sites like AnTuTu and GFXbench provide a wealth of information on unannounced products, and an interesting one showed up a few days ago from an unlikely source. HP is apparently testing a new tablet with the codename HP Red, and it’s shaping up to be a beastly slate.

The HP Red has surfaced on the benchmarking site GFXBench, and it’s a bit of an oddball. The device appears to be a 16-inch tablet with a resolution of 2048×1536. Not necessarily what you expect from a company that generally puts out budget-friendly Jellybean slates. The HP Red isn’t outdated in terms of specs, and it will run Android 4.4.2 out of the box.

Under the massive hood of the HP Red, you’ll find 2GB of RAM and 16GB of storage which we hope is expandable. If you’re expecting another underwhelming Snapdragon 400 under the hood, you’ll be pleased to know the Red is testing with the speedy Snapdragon 800. Everything about the device is a surprise including the dual 7MP/8MP cameras.

If you’re thinking 16-inches is a bit large for a tablet, you’re not the only one. The product could be a part of HP’s all-in-one line, but it has all the trappings of a tablet with the cameras, pedometer and GPS along with a slew of other mobile features. It’s nice to see HP going all out with the HP Red, let’s just hope its priced right and actually makes it to retail.