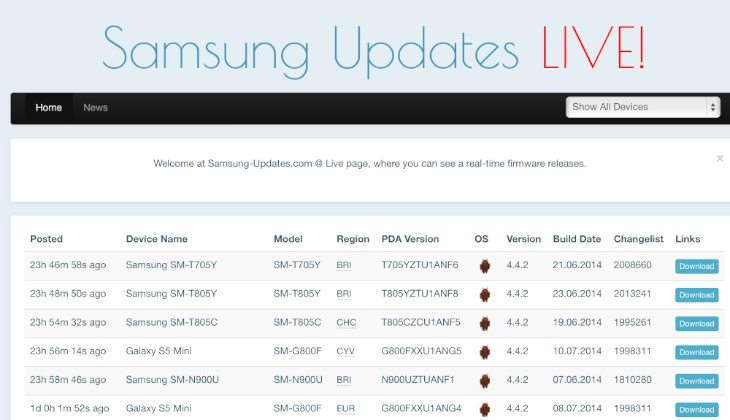 One of the questions we are most asked at Phones Reviews regards when new operating system updates will arrive for devices. Android 4.4 KitKat released last year and has now received several incremental updates, and if you have a Samsung device there’s an easy way to check update statuses. A Samsung new Android update list in real-time will keep you in the loop about update arrivals.

Some devices have still not received Android KitKat although we already reached Android 4.4.3 early in June with Android 4.4.4 starting to roll out for some handsets later that same month. Real-time firmware releases are now shown on this Samsung Android update list, and this should be an easy way to find out whether your device is running the latest version available for it.

The page is a good bookmark to new Samsung Android updates and includes device names and model numbers, regions, the OS version number and build date, and also download links. For example if you look right now you’ll find that the Galaxy Note 3 SM-N900 with the Exynos processor is currently on Android 4.4.2 KitKat while the Galaxy Trend Plus GT-S7580 is still on Android 4.2.2 Jelly Bean.

It’s worth noting that if you click the tab at the top right of the page you can see narrow down your list to a particular device and model number. Android L is the next major upgrade to Google’s Android operating system and is heading for a public release in fall, so this page is likely to come in very useful when the new OS arrives. Will you be using this new Samsung Android update list?

One thought on “Samsung new Android update list in real-time”