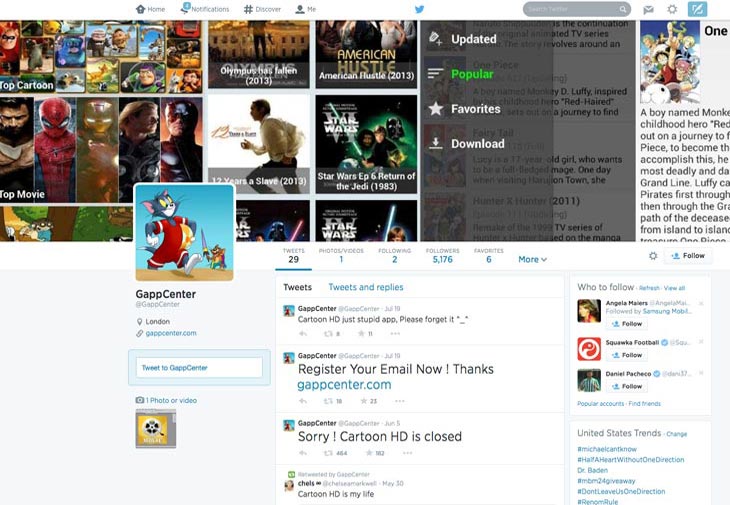 The Gappcenter Twitter feed stayed open after Cartoon HD was closed along with Gappcenter.com. Since then we’ve seen fans crying out for the free movie streaming app to return and some have even claimed it’s back up working again, although this is without new movies being added to the database and most likely a glitch.

What’s clear about the Cartoon HD app developer is his mission to gain a following, so he can make an announcement about a new app. Most people might not know this guys name, but they certainly know his Cartoon HD app and would at least try something new being offered.

Cartoon HD dev using fame for next app – Product Reviews pointed out the Twitter social growth this week for Gappcenter and the fact there’s still Cartoon HD app screenshots on that very Twitter channel. It’s not clear if there will be a more legal Cartoon HD 2 app released, or something totally new still offering free movies and cartoons.

Register Your Email Now ! Thanks http://t.co/aAxY6w9cQF

One thing very evident right now is the mission to grow a Gappcenter email list thanks to the developer asking for people to subscribe and be one of the first to get news about the new application. It’s also clear there’s no plans to close the twitter.com/GappCenter account, and this is growing every day with a jump from 5,176 to 5,182 in the last few hours. This isn’t much, but it’s climbing a lot over a month and these people will be the first to learn about any new app.

If you think Cartoon HD is back, then it’s just a glitch and the developer wants everyone to forget about Cartoon HD. If you still have faith in this developer to offer something good in the future, then join the others following his Twitter ready for a new app. We doubt expectations will be met, especially considering everyone wants totally free movies and it will be hard to launch a true Cartoon HD alternative.

What’s your thoughts on the Cartoon HD developer using his fame to grow followers for a new app? Do you think he will manage to reach the expectations of his followers?