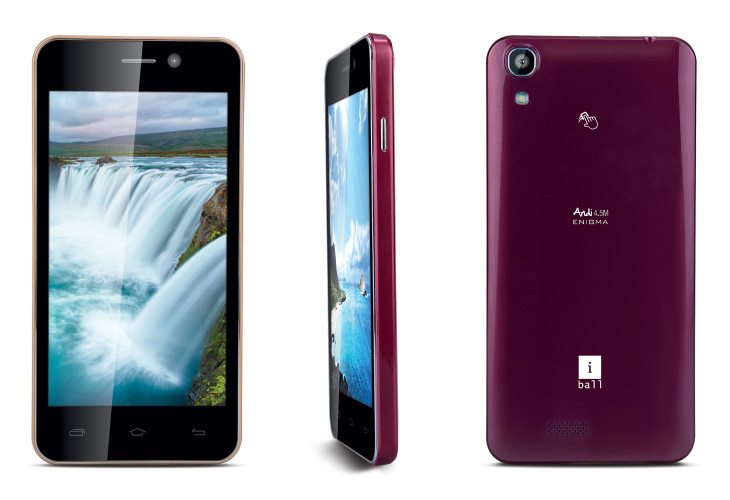 We cover a lot of smartphones that tread off the beaten path, and if you’re not familiar with the brand iBall, you’re not alone. They may not be a household name, but they’ve just put out a new handset in India that’s worth a look with the iBall Andi 4.5M Enigma.

The iBall Andi 4.5M Enigma specs show a 4.5-inch handset with a 960 x 540 IPS display. Under the glass, you’ll find a 1.3GHz quad-core A7 SoC with 1GB of RAM, 8GB of expandable storage, and a 1,500mAh battery. Not impressed? It gets better as the rear camera is a 13MP unit while the front-facing wide angel snapper clocks in at an astounding 8MP. You’ll have no problem taking selfies with the iBall Andi 4.5M Enigma.

As for the extras, there are many. The iBall Andi 4.5M Enigma has gesture recognition, 22 system languages and multi-regional support for 15 Indian regional languages. There’s also something called a “Back Touch Sensor” although we’re not really sure what it does. It’s a Dual SIM handset, and connectivity options include 2G, 3G, Wi-Fi, Bluetooth, NFC and GPS. The device is 8.77mm thick, weighs 135 grams, and runs Android KitKat 4.4 straight out of the box.

The iBall Andi 4.5M Enigma price in India is listed at Rs. 8,499 on the company’s official website. No release date has been given, but you’ll be able to pick one up in a goldish color or purple when it arrives.

What do you think about the new iBall Andi Enigma?