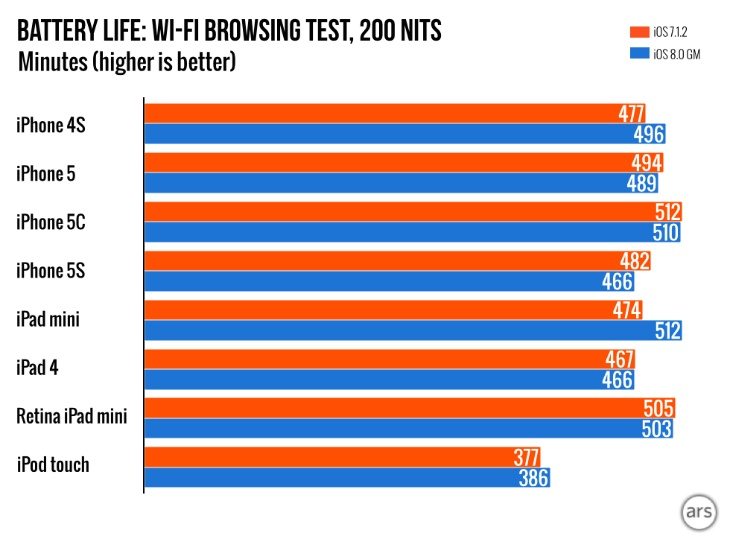 Millions of Apple mobile device users now have access to iOS 8 after it released to the public yesterday. Those who haven’t already updated their iPhones and iPad are likely to pretty soon, and one thing that’s often a subject of discussion following a new iOS upgrade is how it has affected battery life. Now it’s reported that the iPhone 5S battery life has been hit by iOS 8 while the iPhone 4S has gained.

Every time a new major iOS update releases, we are inundated with comments and emails by readers about iPhone battery issues. While some improvements to battery life are often claimed, there always seem to be other users reporting that battery life has been adversely affected. With that in mind it’s interesting to see a new iOS 8 review that includes an interesting section on battery life.

Ars Technica has conducted some extensive battery testing on various iOS devices. Each device was tested four times for Wi-Fi browsing on iOS 7.1.2 and also on the iOS 8 GM. For some iPhone models the battery life has seen improvements, these include the iPhone 4S, iPad mini, and iPod touch. However, the battery life for other devices has been reduced, some to more extent than others. If you look at the chart in the main image below our story you’ll see that these include the iPhone 5S and also to a lesser extent the iPhone 5C and iPhone 5.

Ultimately, for most devices the increases or decreases in battery life on iOS 8 are not significant and remain similar to iOS 7, although it will be interesting to see further battery tests when more widgets and extensions have been loaded on to devices. Therefore if you were hoping for a notable boost in your iPhone battery life there’s not too much to get excited about.

You might also be interested in checking out Apple’s claims for battery life on the new iPhone 6 and iPhone 6 Plus when compared to the iPhone 5S in our previous article. One thing we will say is despite the fact that this testing shows that battery life changes are not too notable, we often find that readers experiences don’t reflect this.

If you have already downloaded the iOS 8 update to your iPhone or iPad we’d be really interested to hear if you think it has affected the battery life significantly, either positively or negatively? Let us know by sending your comments, and it would be good to hear what device you are using as well.