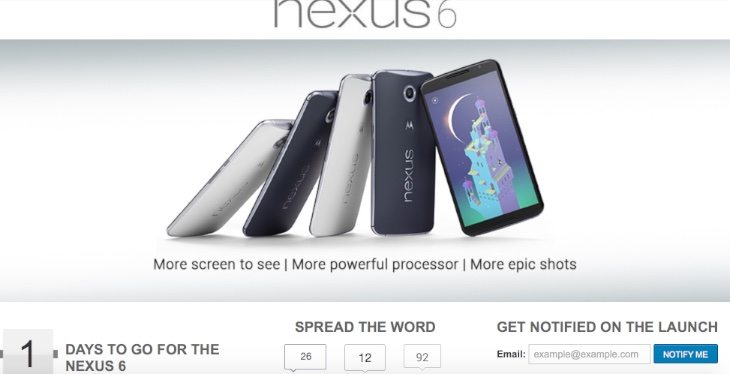 The Google Nexus 6 launch for India is keenly awaited by plenty of buyers and earlier this month we told how the price had been confirmed on the Google Play Store. Now there’s news that Nexus 6 India Flipkart sales could start tomorrow, so fingers crossed if you’re one of the many who want to purchase this device.

Previously we informed readers that Nexus 6 pre-orders had begun on Google Play India but it was simply listed as “coming soon” with no specific date available. As well as this Flipkart had posted a teaser saying that the phone was coming soon. However, that’s all changed today as the Flipkart product page for the Nexus 6 now declares “1 Day to go for the Nexus 6.”

Obviously this is a strong indicator that the Nexus 6 is just about to launch on Flipkart, although on its Twitter page the phone is still teased as coming soon. However, eager consumers have noticed that opening the link on the Flipkart tweet takes you to the ‘1 day to go’ page, and this is understandably causing some excitement.

What isn’t clear is whether this means that the phone will be available on Flipkart from tomorrow or whether this is when the giant retailer will offer pre-booking for the Nexus 6. If the phone does hit availability tomorrow though, then it’s likely that it will also be obtainable on the Google Play Store.

The price of the 32GB Nexus 6 on Google Play was confirmed at Rs. 44,000 while the 64GB version price is Rs. 49,999 and it will be available in Midnight Blue or Cloud White Color options. The prices of the phone on Flipkart will be the same as on Google Play. If availability is indeed about to begin then it’s possible that sales could begin today at midnight, and we’ll be waiting to see if there will be any Flipkart Nexus 6 launch day offers.

If you haven’t yet made up your mind whether to buy the Nexus 6 running Android 5.0 Lollipop you might like to check out our many articles on the phone here. These include comparisons with other smartphones and more. Are you hoping that you’ll be able to get your hands on the Nexus 6 from tomorrow? Let us know by sending us your comments as we’re always interested in your feedback.