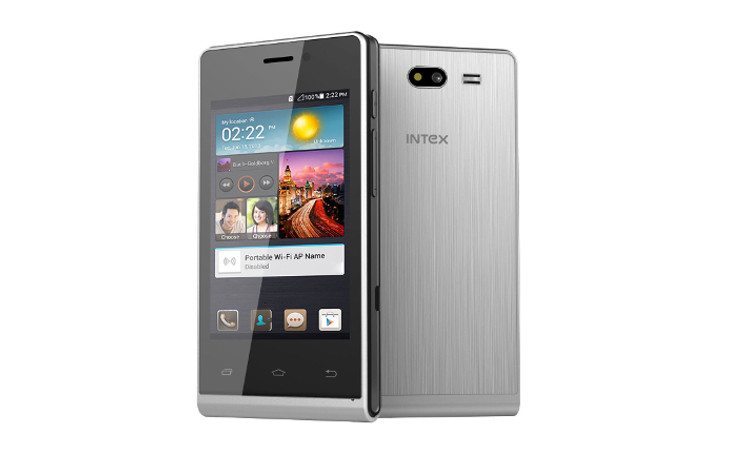 Intex has produced quite a few handsets this year, and we’ve covered various smartphones from their Aqua series numerous times on-site. Ready for another phone in the Aqua lineup? The company is bringing another low-priced offering to India, and this time around it’s the Intex Aqua V4.

There are too many phones in the Aqua series to keep track of, but the Intex Aqua V4 is the company’s latest device for folks in India. It’s not going to turn heads with its specs or blow anyone away with features like fingerprint scanners or QHD displays, but it won’t break the bank and it’s a sleek looking device as you can see from the photo.

The Intex Aqua V4 specs show us a device with a 3.5-inch HVGA display, and it gets its horsepower from 256MB of RAM and a 1GHz Spreadtrum SC7715 chip. You’ll also get 512MB of RAM to work with, and it’s thankfully expandable due to a microSD slot. Connectivity options include Bluetooth, WiFi, 3G, and an FM radio.

Photobugs will be pleased to know the Aqua V4 still comes with dual cameras despite its price, so you’ll get a 2MP rear snapper and 0.3MP front-facing camera. There are no “features” to mention aside from the specs, but it does come with dual-SIM capabilities. The Intex Aqua V4 will run Android 4.4 out of the box, and is powered by a 1,200mAh battery.

If you want to experience Android 4.4 KitKat and not spend much money to do so, the Intex Aqua V4 seems like a fine choice. The phone is currently priced Rs. 2,699 and up for grabs in Black, Silver, Grey, and Gold on eBay India if you’re interested in picking one up.