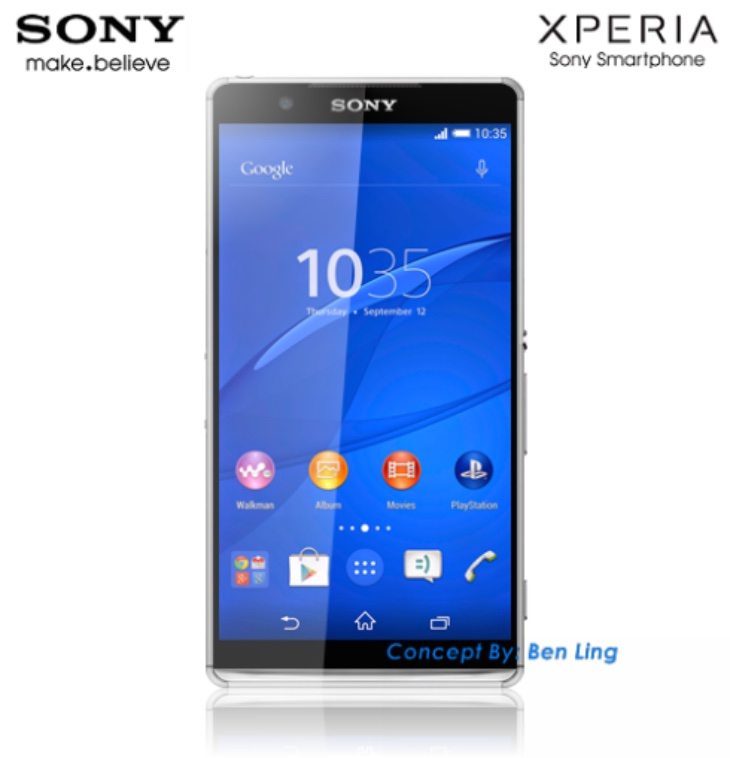 There’s already talk of the Sony Xperia Z4 and Z4 Compact being introduced at CES 2015 taking place in January, although nothing is certain at this early stage. However, appetites are already being whetted for these devices by concept designers, and today we have a Sony Xperia Z4 Compact design to show you that comes with a full specs sheet.

While we’re already seen several concept renders for the Xperia Z4, we haven’t seen much on the Xperia Z4 Compact and this design from Ben Ling certainly offers some interesting food for thought. Of course we don’t even know if there will be a Z4 Compact but it seems likely, and we wonder if you would like it to look anything like this idea.

Ling has included plenty of specs to get our teeth into and this Xperia Z4 Compact includes a 2.7GHz Snapdragon 805 quad-core processor, a 4.8-inch Full HD Triluminos display, 3GB of RAM, and 32GB of internal storage that’s expandable to 128GB via microSD. It has a 21-megapixel rear camera with 1/2.4-inch sensor size and Sony Exmor RS technology, and 4k video capture. As well as this there’s a 3.2-megapixel front-facing camera with 1080p video recording capability. There’s also a physical camera button. 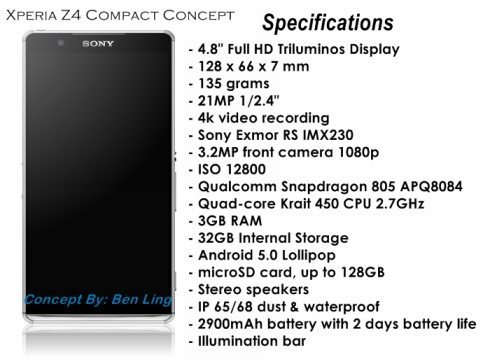 It has a 2900 mAh battery and runs the Android 5.0 Lollipop operating system, as you’d expect. The phone measures 128mm x 66mm x 7mm so is nicely slim, and it weighs 135g. It has stereo speakers and is dust and waterproof to IP65/68 certification standard. It also features PlayStation certification as well as PS4 remote play. Other features include a Glove Mode, DSEE and Sony 3D Surround, and NFC, and there’s also an illuminations bar

It’s nice to see a concept idea being given the full specs and features treatment and CES in January will soon roll round where we expect to see some big unveilings from Sony, possibly with a Z4 Compact in the mix. In the meantime we’d like to know what you think about this imagined Xperia Z4 Compact design? What specs and features are you hoping for in the real deal? Drop us your comments in the box below.