The Cicret Projector Bracelet puts a Smartphone on your Wrist 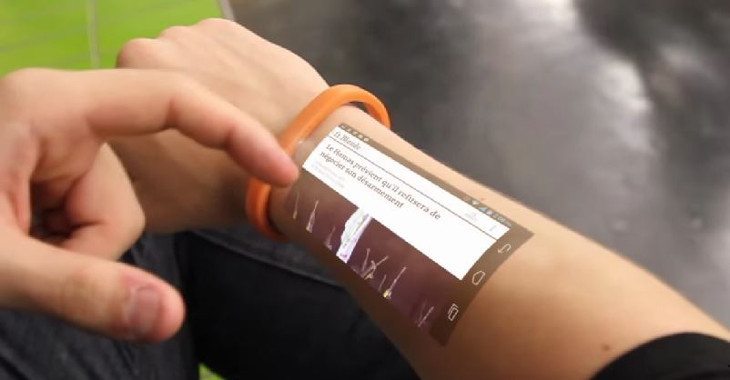 We’ve seen some cool smartphone concepts this year, but most never make it to primetime. That doesn’t seem to be the case with the Cicret Smart Bracelet, and it is hands down one of the cooler wearables you’re likely to see if it’s creators get some funding.

In a nutshell, the Cicret Projector Bracelet is a smart bracelet that can actually “project” a smartphone onto your wrist. We mean that in the most literal sense as you can see from the photos below. Pretty damned cool isn’t it? It could also be extremely useful in certain situations where you needÂ both hands free.

Designed to look like a fitness band, the Cicret Projector Bracelet houses a little pico projector along with a row of proximity sensors. Twist your wrist, and the projector will turn on and throw up a virtual smartphone on your wrist. The sensors keep tabs on where your digits roam, and allow you to use your skin just like you would the screen on your favorite Android device.

In addition to its projection capabilities, the Cicret smart bracelet has an LED for notifications, a couple of sensors, a micro USB port, Bluetooth and WiFi. You’ll be able to sync up with a phone, and you “should” be able to do most things you can do on your handset including texts, gaming and videos.

If you think you’ve seen the Cicret concept before, you have. It was on Indigogo previously, then pulled for a bit a reboot. The company is now taking “Donations” directly from their site. You can contact them if you are a future buyer, but we did not see an option to actually pre-order a bracelet like you normally would in a crowdfunded campaign, so keep all this in mind. If you want to find out more about the Cicret Projector Bracelet,Â head on over to their official site.