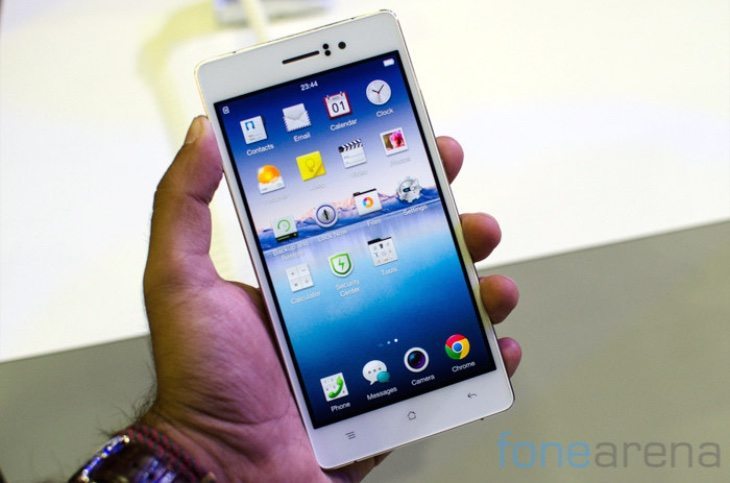 In late October Oppo announced the R5 along with the Oppo N3 at an event in Singapore. The R5 handset is just 4.85mm thick and it has been described as the world’s thinnest smartphone. Now the phone is about to arrive for the Indian market, and we have details of the Oppo R5 official price for India from the launch today.

Interested buyers will be able to pre-book the Oppo R5 from January 1st 2015, so there’s literally just days to wait. It’s available in a silver color and the Oppo R5 price is confirmed at Rs. 29,990. Specs of the phone include a 1.5GHz Snapdragon 615 octa-core processor, Adreno 405 graphics, and a 5.2-inch AMOLED display with resolution of 1920 x 1080. It has 2GB of RAM and 16GB of internal storage (expandable) and it runs the Android 4.4 KitKat-based Color OS 2.0.

The Oppo R5 has a stainless steel body and along with its extreme slimness this makes the handset look very sleek and stylish. At the launch for India Oppo CEO Tom Lu said, “We used cutting edge manufacturing techniques to create a phone that fits perfectly into the users’ hands, and that feels incredible. The frame has been forged nine times and then finished by hand to give a perfect sheen and feel. It has a quality that is not available anywhere else in the industry.”

We’d be interested to hear what you think about the launch of the Oppo R5 in India. What are your thoughts on the pricing of the phone and its slick design? Let us know with your comments.