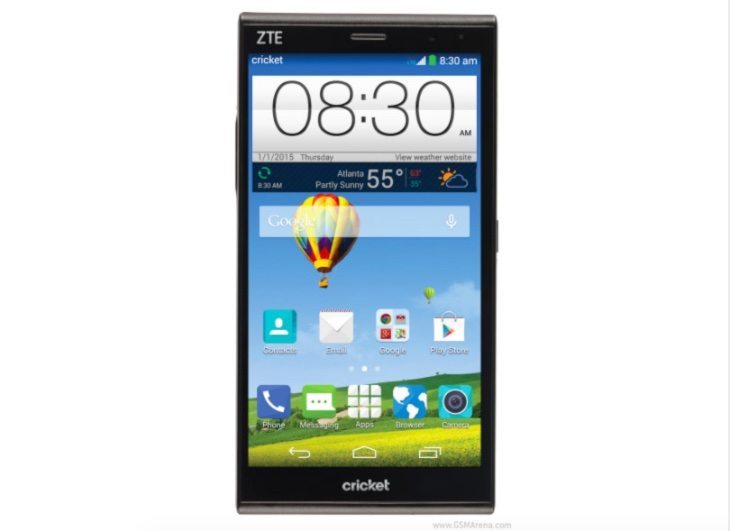 We’ll begin with the key specs of this device, and it’s powered by a 1.2GHz Snapdragon 400 quad-core processor with Adreno 305 graphics, and has a 6-inch display with resolution of 1280 x 720 resulting in 245 ppi. It has 2GB of RAM, and 16GB of internal storage, expandable to 32GB via microSD. At the back there’s a 13-megapixel camera with LED flash, and there’s also a 5-megapixel front-facing camera for selfies.

The ZTE Grand X Max+ has a 3200 mAh battery with QuickCharge 1.0 feature, although rather oddly for such a large battery capacity it’s said to last for only around 6.5 hours of talk time. Connectivity is catered for with 4G LTE, WiFi b/g/n, and Bluetooth 4.0. This smartphone runs the Android 4.4 KitKat operating system and weighs 171.8g, measuring 7.87mm thick.

The price of the phablet on Cricket Mobile is $200 with no contract (with monthly plans from $40). Design-wise the reverse of the phone features a carbon fiber pattern similar to some Motorola devices. It’s worth pointing out that the Grand X Max+ has a couple of nice improvements over the standard Grand X Max, which only had 1GB of RAM and a 1-megapixel front-facing camera.

Do you think you might purchase the ZTE Grand X Max+ from Cricket Mobile? What is it about this phablet that appeals to you most?