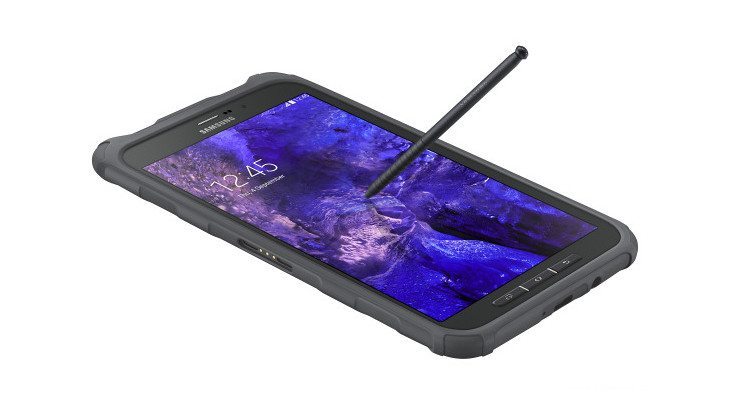 Samsung has given us a lot of tablets to look at over the past year, but one is a bit tougher than the rest. It’s called the Galaxy Tab Active LTE, and it can deal with harsh elements that would leave other devices bricked. The rugged slate has finally made its way through the FCC, and we’re going to revisit the Galaxy Tab Active specs.

The Samsung Galaxy Tab Active LTE sports an 8-inch display with a resolution of 1,280 x 800. Under the glass, you’ll find a 1.2GHz quad-core Snapdragon 400 humming along and backed by 1.5GB of RAM. The storage space is listed at 16GB, but expandable up to 64GB via a microSD card. The Tab Active will come with a 3.15MP rear snapper and a 1.2MP front-facing camera as well.

On the connectivity side of things you’ll have Bluetooth 4.0, LTE, WiFi, GPS, and NFC. The Galaxy Tab Active LTE gets its juice from a removable Â 4,450mAh battery, and is listed as running Android 4.4.2 with TouchWiz on top. It’s obviously a mid-range slate, but it’s a mid-ranger that can withstand a 1.2 meter drop and has IP67 certification to keep it safe from dust and water.

The Galaxy Tab Active LTE was unveiled back in September at IFA 2014, and it’s take a while to hit the FCC in the states. We still don’t’ have an official release date stateside from Samsung, but we expect to hear something official soon.