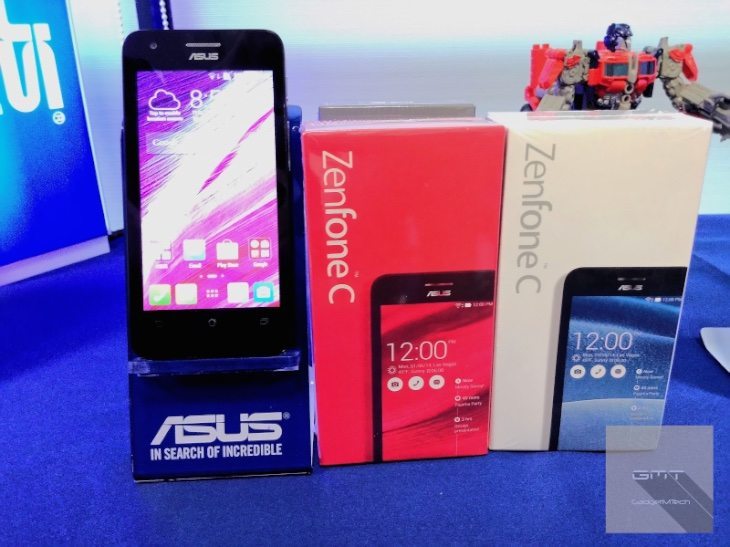 The Asus ZenFone series of phones has been pretty popular lately, for some regions more than others. Many readers will have heard of the Zenfone 4 and now a new kid on the block is to release in early February. The Asus Zenfone C price has just been announced, and the company says it will be a replacement for the Zenfone 4. We have specs and further details coming right up.

The Zenfone C is a low-end smartphone and as far as the design is concerned it looks virtually the same as the Zenfone 4. However, in terns of hardware there are some improvements. The phone will be available in black, red or white color options and will be introduced in Malaysia next month, although details for other regions aren’t clear yet. Its price has been set at MYR 349, that’s approximately $97, Â£64 or Rs. 5,950 although pricing can vary from market to market.

Specs of the phone include a 1.2GHz Intel Atom Z2520 processor, a 4.5-inch IPS display with 854 x 480 resolution, 1GB of RAM, and 8GB of internal storage (expandable to 64GB with microSD). There’s a 5-megapixel rear camera with f/2.0 aperture, LED flash, and improved low-light photography with EIS technology, as well as a 0.3-megapixel front-facing unit. The Zenfone C will be running the Android 4.4 KitKat operating system out of the box with the company’s Zen UI.

There are likely to be plenty of potential buyers for this new entry-level Asus smartphone. Give us your initial thoughts on the Zenfone C by sending in your comments.