Huawei has a good year in 2014, and they have big plans for this year as well. We told you how their smartphone division has grown, and now we’re getting a look at the Huawei Roadmap for 2015 which will kick off when MWC rolls around in March.

Huawei held a press event to talk about their products for the year, and a slide has leaked out that shows the Huawei product Roadmap for 2015. The first batch of new products will be unveiled at MWC 2015 in March, and we’re getting new smartphones, tablets, and wearables spanning several different series.

The new Huawei smartphones that will be announced include the Mate P Series, Honor Series, and two more products known as the Huawei Y and Huawei G series. Obviously, we’re quite familiar with the Honor and Huawei Mate lineups, and we’re going to assume the G and Y series are probably mid or low-end devices.

The Huawei M-Series will offer customers “outstanding audio/visual experience” which means we’re looking at media-based slates of sorts. The X-Series on the other hand, will provide a “Big Screen Integrated Experience” which would lead one to believe they would be large tablets despite the fact they look rather small in the photo when compared to the M-Series. 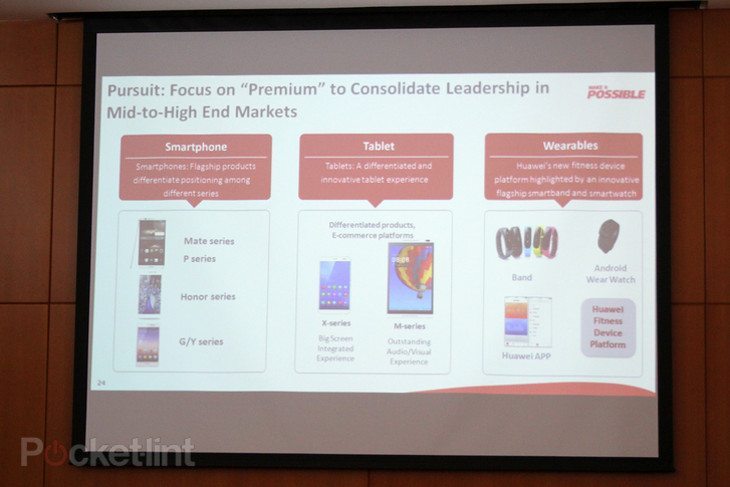 Last but not least in Huawei’s 2015 roadmap are its wearables. The company has a new smartband in the works, and there’s a photo of a Huawei App, which looks to be geared towards fitness. As for the watch, little is known aside from the fact that it will run Android Wear and have a round face.

In addition to the Huawei roadmap, the company has said they have no plans on dipping their toes into the Windows waters anytime soon as the platform is too restrictive, so everything they show at MWC will run Android in some form.

Are you excited by Huawei’s 2015 product lineup?