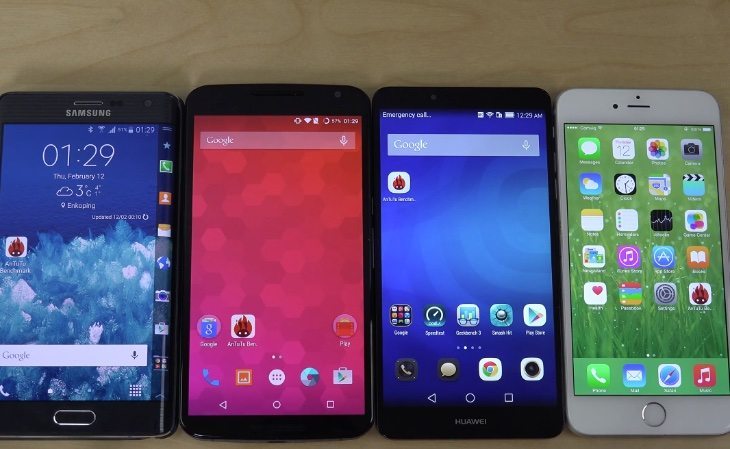 It can be interesting to see how various high-end devices compare in different aspects and one thing we know our readers always enjoy is a speed test. Today we have a video to share of the iPhone 6 Plus vs. Nexus 6, Samsung Galaxy Note Edge and Huawei Ascend Mate 7 in a speed test using AnTuTu benchmarking.

Just to give you an idea of some of the key specs, the iPhone 6 Plus has a 1.4GHz Apple A8 dual-core processor with PowerVR GX6450 quad-core graphics and 1GB of RAM. The Galaxy Note Edge has a 2.7GHz Snapdragon 805 quad-core processor, Adreno 420 GPU and 3GB of RAM. The Motorola-made Google Nexus 6 has exactly the same as the Galaxy Note Edge for these specs, while the Ascend Mate 7 has a HiSilicon Kirin 925 octa-core processor with 4 cores at 1.8GHz and 4 at 1.3GHz, Mali-T628 GPU, and 2 or 3GB of RAM depending on storage option.

Beneath this article we’ve embedded a YouTube video for your viewing convenience, and it shows all of the above phones alongside each other. The reviewer first runs through the operating systems being used on each handset and shows that all apps on each device have been closed. The phones are then put through their paces, with the AnTuTu benchmark test being conducted on each one.

While this is taking place the reviewer makes some observations and it soon becomes clear that the actual testing process is quicker on the two handsets with the Snapdragon 805 processor with the Apple phone lagging behind. Finally you’ll see the scores that each device attained with the AnTuTu testing. We won’t give away the results here, as you might prefer to find out when you view the video, but we will say that the scores of the Samsung Galaxy Note Edge and Nexus 6 are very close.

Once you’ve taken a look at the video down below we’d like to hear your thoughts on this speed test for the iPhone 6 Plus vs. Nexus 6 vs. Galaxy Note Edge vs. Nexus 6. Do any of the results surprise you? Drop us your comments in the box below.