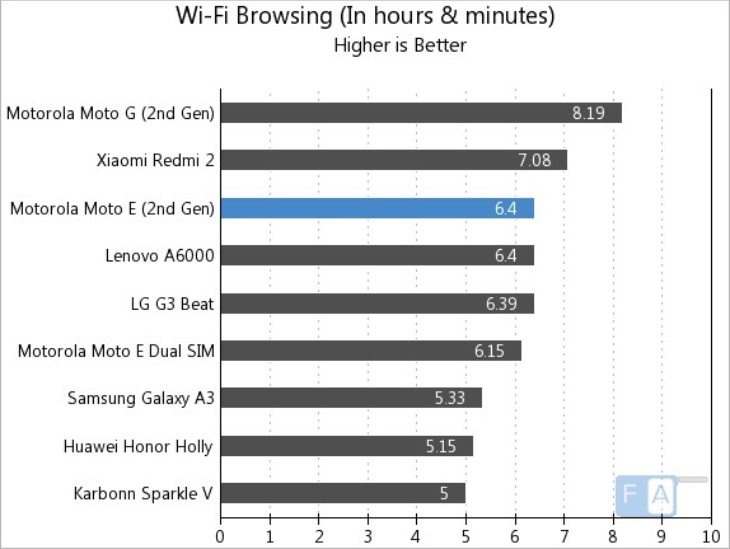 The Motorola Moto E (2015) recently released and is likely to be another hit for the company if the success of the first generation model is anything to go by. Many people will be considering this handset, and battery life is becoming an increasingly important factor for many buyers when purchasing a new smartphone. With this in mind we have information about the Moto E 2nd gen battery life tested and compared.

The new Moto E 3G model has a 2390 mAh battery to juice its Snapdragon 200 quad-core processor and 4.5-inch display. The phone has now been put through its paces for battery life performance, with Fone Arena conducting its usual battery life tests. These cover Talk Time, 3G Browsing, WiFi Browsing and Video Playback.

The results are then charted and compared with several other popular handsets of the moment. Just a few of these are the original Moto E, the Xiaomi Redmi 2, Moto G 2nd gen, Lenovo A6000 and Samsung Galaxy A5, so it’s interesting to see how the budget Moto E 2nd gen stands up against some of the competition.

In the Talk Time category the Moto E 2nd gen attains an impressive time of 33 hours and 19 minutes as shown in the image below, taking the top spot on the table of the phones it’s compared with. In second position was the Lenovo A6000 on 25 hours and 2 minutes, quite some distance behind. The Karbonn Sparkle V languishes at the bottom with a time of just 7 hours and 41 minutes. 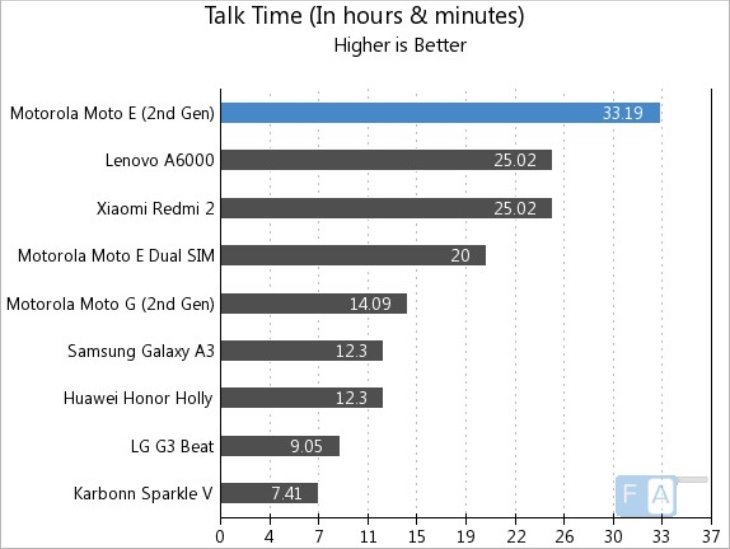 For 3G Browsing the Moto E 2nd gen did incredibly well again. It tied in top place with the Redmi 2 on 5 hours and 33 minutes with the Huawei Honor Holly in third with 5 hours exactly. This time the LG G3 Beat was at the bottom with a time of only 3 hours and 26 minutes.

Next we move on to WiFi Browsing and this time the Moto E 2nd gen still did well, although it was in joint third place with the Lenovo A600 rather than top. Its time of 6 hours and 4 minutes was beaten by the Redmi 2 on 7 hours and 8 minutes and topped by the Moto G 2nd gen on 8 hours and 19 minutes.

Finally we come to Video Playback and this was less impressive as for the first time the Moto E 2nd gen is in the bottom half of the table. It attained a time of 7 hours and 8 minutes, the same as for the Honor Holly. Meanwhile first position was taken by the Redmi 2 on 10 hours, and joint second were the Galaxy A3 and Lenovo A6000 on 9 hours and 5 minutes.

We’ve shown a couple of the tables here but you can see the others as well as Fone Arena’s One Charge Rating for the Moto E 2nd gen at the source below. Overall the results for battery life of the second-generation Moto E are pretty impressive, which will be reassuring for those just about to buy the handset.

What are your thoughts on the battery life performance of the Moto E 2nd gen as shown in this testing?