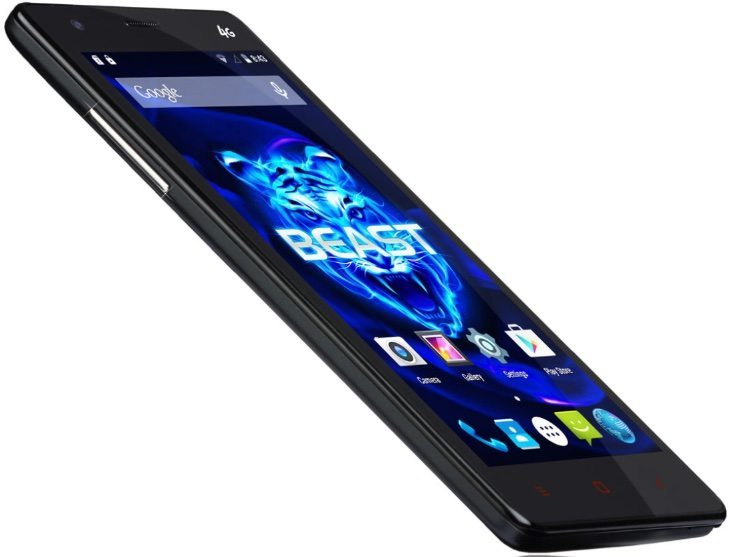 A new iberry smartphone has been launched today in the Auxus series as part of a collaboration with Snapdeal. It looks to have some decent specs for the money, and if you want info on the iberry Auxus Beast price for India as well as launch offers and availability details, read on for more.

We’ll begin with pricing and the Beast will be available for Rs. 13,990 and comes in black. However, if you like a splash of color Snapdeal will also be offering back panels separately in shades of red, blue or white. The Auxus Beast is a Snapdeal exclusive and will be on sale from April 20th so there’s only a week left to wait.

Some launch day offers for the phone will also be available to a value of around Rs. 3,000. These include screen guards, a silicon case, Wi-Cam controller and other goodies. Moving on to specs we can tell you that the Beasts packs a 1.7GHz MediaTek MT6572 64-bit octa-core processor, Mali T760 graphics, and a 5-inch HD IPS display with resolution of 1280 x 720.

This dual SIM handset with dual standby runs the Android 5.0 Lollipop operating system that will be upgradable to a higher version via an OTA (over-the-air) update. It measures 152mm x 78mm x 8.2mm and weighs in at 168.6g. It also features FM radio and a 3.5mm audio jack. At the launch iberry Auxus Business Development Manager Abrar Ameen said this —

“While some are occupied in just allowing consumers to taste economical Android Smartphone with mediocre specs — 32-bit Octa Core 2GB RAM consistently, we thought to bring in little surprise by a bigger and upgraded one — 64-bit Octa Core 3GB RAM phone at a similar cost, with our new Flagship smart phone Auxus Beast. To top it all, 4G LTE, 64-bit CPU and Android 5.0 out of the box, Auxus Beast has all that’s required and more to really suppress all the outdated specifications out in the market and give the Indian Consumer a thrilling opportunity to choose a phone which really stands out of the rest at an affordable price.”

It would be good to know what readers think about the newly launched iberry Auxus Beast. As we said at the top the specs sound pretty good, but it would have been nice to see a higher resolution display to match the other specs. What are your first thoughts on the iberry Auxus Beast smartphone and the price tag that goes with it?