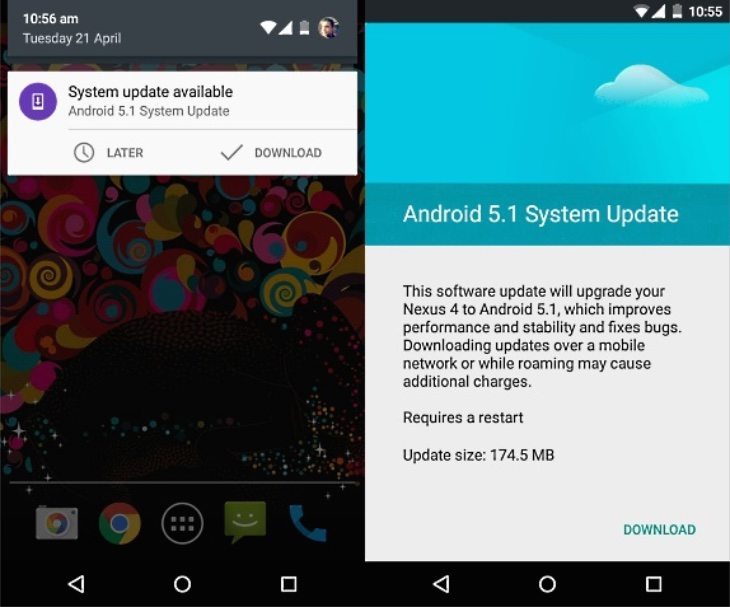 It’s always satisfying to be able to inform readers about the further reach of Android operating system updates, and today it’s the turn of those in India who have the Google Nexus 4 smartphone or Nexus 7 tablet. The Nexus 4 and 7 OTA Android 5.1 Lollipop update is now rolling out for India following the arrival of the same update for the Nexus 5 earlier in the month.

It’s reported that some users of the Nexus 4 and Nexus 7 (2012) WiFi in India, received 5.1 Lollipop as an over-the-air update starting last night. The update is 174.5MB in size for the Nexus 4 and 101.6MB for the Nexus 7. Google hasn’t issued an official changelog but the update notes state improved stability and performance along with bug fixes.

We also know that this update contains some tweaks to Quick Settings in notifications as well as enhanced Android Run Time (ART) that enables quicker opening of apps. Users of the Nexus 4 and Nexus 7 will receive notification to their devices that the update is ready. Alternatively, if you want to check manually you’ll need to head to Settings followed by About Phone and then System Updates.

Previously Google had officially listed Nexus 5, Nexus 10 and 7 (WiFi) Android 5.1 factory images on its developer page. Are you one of our many readers in India who have the Nexus 4 or Nexus 7? If so we’d be pleased to hear if you have already received this OTA update and what you think of the latest changes and improvements? Do drop us a comment to let us know.