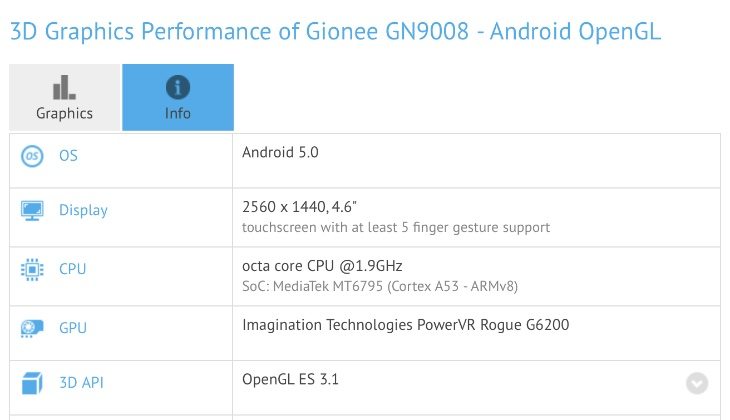 The extremely slim Gionee Elife S7 has only recently been introduced, and now there is a sighting of a new smartphone that could be the Elife S8. The unnamed device has shown up with a GFXBench test that lists some specs. These prospective Gionee Elife S8 specs show extreme ppi with a Quad HD resolution display.

The Elife S7 has model number GN-9006 and the new phone that has turned up in benchmarking is model GN-9008. The close similarity in numbers ties in with this being an Elife S8, although it’s always possible that it could have a different name on release.

Other specs ascertained by the benchmark appearance include a 1.9GHz MediaTek octa-core processor, 3GB of RAM, and 32GB of internal storage. Camera specs also look impressive with a likely 24-megapixel rear camera and 8-megapixel front-facing snapper.

The design of this Gionee phone has not been revealed but it’s likely to continue the trend of being another a very slim handset. For example, the Elife S7 measures just 5.5mm thick/thin whichever way you look at it. We’ll be keeping our eyes open for more on this upcoming Gionee handset so do check back with us from time to time.

Are you interested in hearing more about this so far unnamed Gionee handset that could be the Elife S8? Let us have your comments.