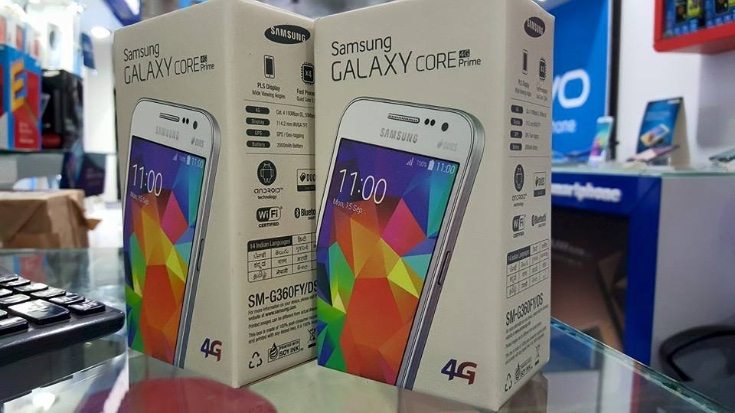 The Samsung Galaxy Core Prime 4G LTE for India has finally made it to an official launch. It had been expected to launch in March but was delayed. Now retailer Mahesh Telecom has announced availability of the Galaxy Core Prime 4G (G360F) at retail stores. Samsung also has a few offers available with purchase of this smartphone.

Samsung has previously said that due to increased demand for LTE devices in India, future devices launched there will all feature 4G LTE connectivity. The price of the Samsung Galaxy Core Prime is Rs. 9,999 and Samsung has teamed up with carrier Airtel to offer 3GB of free LTE data on purchase of the phone. Other offers include a free premium three-month Hungama subscription, and also a free VuClip prime offer for three-months.

The 4G LTE variant of the Galaxy Core Prime has a 1.2GHz Spreadtrum SC8830 quad-core processor, 4.5-inch display with resolution of 800 x 480, 1GB of RAM, and 8GB of internal storage that’s expandable via microSD to 64GB. It has a 5-megapixel rear camera with autofocus and LED flash, a 2-megapixel front-facing camera, and removable 2000 mAh battery.

Are you pleased to know that the Samsung Galaxy Core Prime 4G has now officially launched for India? Maybe you think there are better contenders such as the Lenovo A7000 and A6000 Plus, the Yu Yuphoria, and Redmi Note 4G? Do let us know by dropping us your comments in the box below.