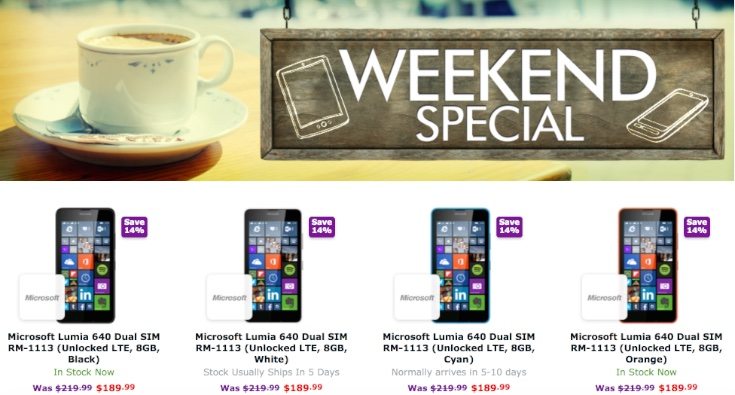 If you have been intending to purchase the Microsoft Lumia 640, 640 XL or LG G Flex 2 but haven’t got round to it yet, then there’s good news for you today. For this weekend only, Expansys USA has some very tasty price slashes for these smartphones, so this would be a good time to finally make that purchase.

You don’t have much time to hang around though as this is an Expansys Weekend Special, so this is the moment to take advantage of these deals. If you’re interested in the Microsoft Lumia 640 LTE it’s currently available for $179.99 for the single SIM model or $189.99 for the dual SIM LTE version. This represents a saving of $30 on each device

Key specs of the Lumia 640 include a 1.2GHz Snapdragon 400 quad-core processor, 5-inch display with resolution of 1280 x 720, 1GB of RAM, and 8GB of internal storage, expandable via microSD to 128GB. It runs the Windows Phone 8.1 operating system with Lumia Denim and is available in black, blue, orange, and white color choices.

You can find out much more about any of the three smartphones on offer in our previous articles on the Microsoft Lumia 640, Lumia 640XL or LG G Flex 2 at the links provided. Remember that if you want to benefit from these current price savings at Expansys this is a weekend special promo. You can find details for all of them at this Expansys page.

Are you intending to pick up the Microsoft Lumia 640, 640 XL or LG G Flex 2 right now with one of the these price deals? Let us know with your comments.