Yu Yureka Plus design and specs steps up the style: Updated 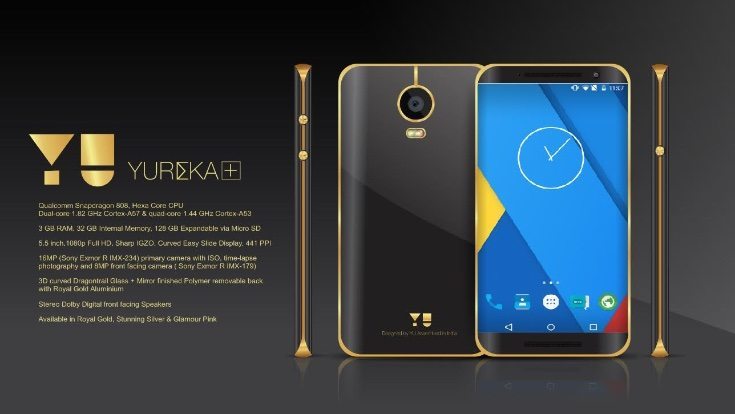 From time to time we enjoy sharing concept ideas as tantalizing prospects for new smartphones, and the one we are showing today will be of particular interest to our many readers in India. The Yu Yureka made by well-known Indian maker Micromax, as well as its Yu Yuphoria successor, have been extremely popular devices. Now we have a Yu Yureka Plus design and specs that steps up the style. We’d like to know what you think of this new Yureka render.

The Yu Yureka released at the beginning of the year and was an instant hit with consumers looking for a value for money smartphone. It was recently joined by the Yu Yuphoria, and now one designer has imagined a beefed up version of the Yureka in the form of the Yu Yureka Plus, seen here as the Yu Yureka+. It comes from Nilesh Chaudhari and is a more premium looking handset with a gold colored frame for those who like a touch of luxury.

As you can see the design differs in several ways from the original Yureka. The rear camera has been moved to the center and the Yu branding is now repositioned at the bottom of the reverse rather than the top. The display has curved edges, a little like the Samsung Galaxy S6 Edge and the whole handset looks to be higher quality. The build users 3D curved Dragontrail glass and there’s a mirror finished Polymer removable reverse with Royal Gold Aluminum.

The designer of this concept vision has also come up with imagined specs for the device. This Yu Yureka Plus is powered by a Snapdragon 808 hexa-core processor (two cores at 1.82GHz and four at 1.44GHz), with a 5.5-inch Sharp IGZO display with Full HD resolution of 1920 x 1080 and 441 ppi. There’s 3GB of RAM and 32 GB of internal storage that can be expanded via microSD to 128GB.

We wonder what readers think about this Yu Yureka Plus smartphone concept? Would you like to see a premium Yureka handset featuring this kind of design and specs? We’re always interested in comments from readers so do please let us know.

UPDATE: The real Yu Yureka Plus has just been announced and you can read all about it here.

14 thoughts on “Yu Yureka Plus design and specs steps up the style: Updated”