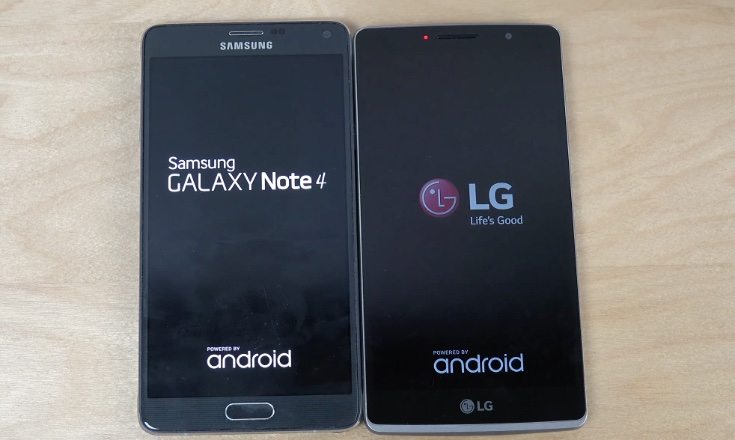 The Samsung Galaxy Note 4 is the company’s flagship phablet device that released last year. On the other hand the LG G4 Stylus released this May as a more mid-range variant of the LG G4 flagship. As its name suggests it comes with stylus use, just as the Note 4 does. We thought it would be interesting to look at these two phablets in a quick Samsung Galaxy Note 4 vs. LG G4 Stylus bootup speed test.

The LG G4 Stylus is a much cheaper offering than the Galaxy Note 4 so as you might expect the specs don’t match up. They are both Android devices with 5.7-inch displays but the similarities pretty much end there. It’s always interesting to see how particular aspects compare on smartphones though, and the bootup test we’re showing today comes courtesy of Adrianisen over on YouTube.

We’ve embedded the video below this article and it shows the Samsung Galaxy Note 4 on the left and the LG G4 Stylus on the right. You’ll see both phablets being simultaneously powered up to see which is up-and-running first. One is notably faster than the other but we’re not going to tell you which here as you might prefer to find out when you watch the video.

After the bootup test the reviewer then discusses the differences in the displays of the two devices. The video continues by opening apps to see which is quickest, and taking a look at how they vary in some other aspects such as multitasking, heading into Settings, and also checking out stylus use.

When you’ve taken a look at the video below we’d be interested to hear your thoughts on the bootup outcome of the Samsung Galaxy Note 4 and LG G4 Stylus. Do feel free to send in your comments using the box provided below.