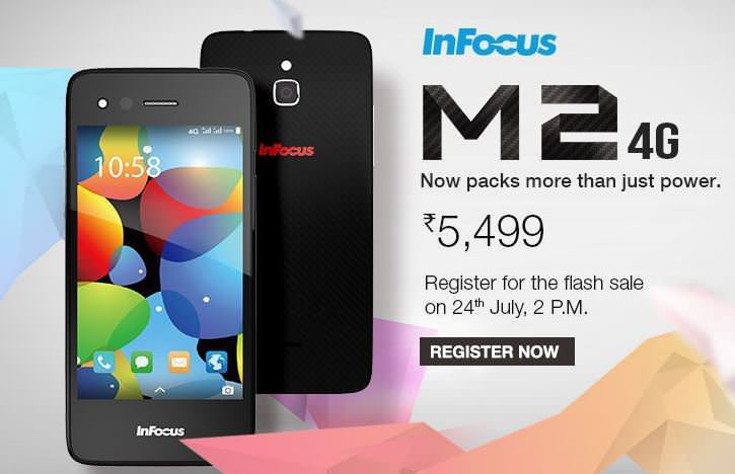 In the smartphone world, time tends to move fast. The original InFocus M2 release hit India earlier this year, and today we are getting a look at the InFocus M2 4G. As the moniker implies, you’ll be getting 4G LTE this time around…

The original InFocus M2 didn’t set the world on fire, but it did have some interesting specs and a low price tag. The same can be said for the InFocus M2 4G as it is almost the same handset with a few important exceptions. As mentioned, the device will now have 4G capabilities (on one SIM) with support for FDD-LTE Bands 1, 3, 7, 8 and 28 along with TDD-LTE Bands 38, 39, 40, and 41. The LTE wouldn’t be possible without a chip swap which means the InFocus M2 4G will now sport a Snapdragon 400 in place of the 1.3GHz MediaTek chip found in the previous model.

Networks and processors aside, the InFocus M2 4G appears to be a solid device on the low-end of the spectrum for 2015. It sports a 4.2-inch display with a resolution of 1,280 x 768 and has 8GB of internal storage and 1GB of RAM. Photos fans will be pleased with the camera setup as you’ll get an 8MP sensor with an LED flash on the back, and an 8MP snapper with an LED flash on the front. Other options to note include a microSD card slot, Wi-Fi, Bluetooth 4.0, a 2,010mAH battery and Android 4.4.

The InFocus M2 4G release is set to arrive in India starting July 24th in a “Flash Sale” through Amazon.in. It’s an exclusive, but it’s one you may want to pay attention to considering the InFocus M2 4G price is listed at Rs. 5,499/â‚¬79. Pre-registrations have already begun and the handset will be available in Black or White at launch.