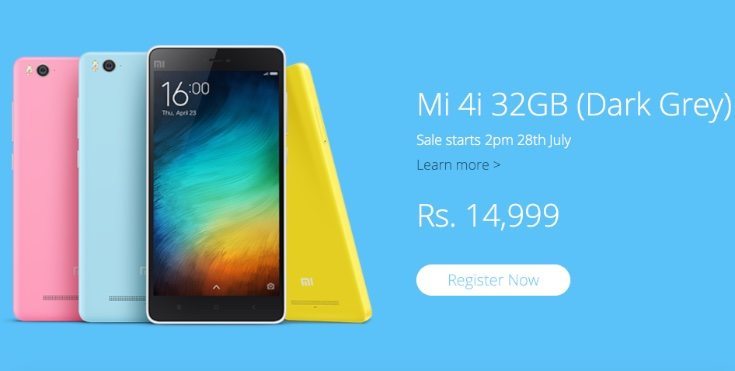 If you are one of our many readers in India you may have been thinking of purchasing the Xiaomi Mi 4i smartphone. This has already been on sale in a model sporting 16GB of internal storage but there have been rumors a 32GB version was on the way. The Xiaomi Mi 4i 32GB price for India has now been announced, and we also have info on the first flash sale date and more.

The Xiaomi Mi 4i has already been pretty popular in India and was first sold in the flash sales system exclusively on Flipkart. However, earlier this month we told how the phone would be available on open sale from that point on, with the same Rs. 12,999 price tag. This smartphone has plenty to offer but one of its only drawbacks is the 16GB of internal storage that’s non-expandable. Therefore the new 32GB model could be welcomed by plenty of potential buyers.

The Xiaomi Mi 4i 32GB price in India has been confirmed as Rs. 14,999 so there’s a Rs. 2,000 premium over the 16GB variant. It comes in dark gray and will be sold through the flash sale system with the first sale date on July 28 from 2pm. Registrations for the sale are already open.

Other specs for the device remain the same as for the 16GB version. Therefore it has a Snapdragon 615 octa-core processor, Adreno 405 graphics, and a 5-inch Full HD display. It has 2GB of RAM, a 13-megapixel rear camera, 5-megapixel front-facing snapper, and 3120 mAh battery. It runs the Android 5.0 Lollipop operating system with Xiaomi’s MIUI 6.

You can see more about Xiaomi Mi 4i 32GB model or register for the sale at Mi.com. Xiaomi is celebrating its first anniversary of presence in India and the company says there will be daily surprises from July 22 to July 28. Are you tempted by the larger storage model of this device? What are your thoughts on the Xiaomi Mi 4i 32GB price in India? Do let us know with your comments.