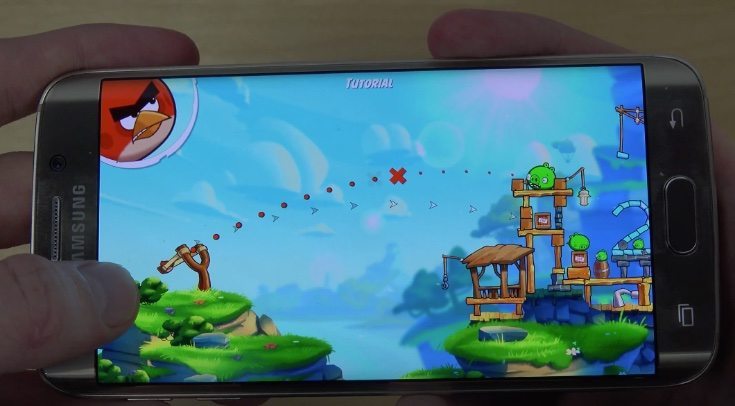 The long-awaited Angry Birds 2 app released for Android and iOS devices at the end of last month and will no doubt bring a whole new legion of fans to the phenomenally popular franchise. Meanwhile the Samsung Galaxy S6 Edge is the premium version of the current flagship smartphone from the company, and many Angry Birds 2 players will be using this mobile device for their gaming action. With this in mind we have an Angry Birds 2 review with Samsung Galaxy S6 Edge gameplay for your deliberation.

Specs of the Galaxy S6 Edge include an Exynos 7420 octa-core processor, with Mali-T760MP8 graphics, and 3GB of RAM, so it should be suitably equipped to cope with the demands of mobile gaming. Add to the mix a 5.1-inch Super AMOLED display with Quad HD resolution of 2560 x 1440 and a whopping 577 ppi, and your gaming experience with Angry Birds 2 looks set to be well above average.

So is that the case? You can check it out for yourself in the YouTube video showing an Angry Birds 2 review that we’ve embedded below that comes from regular contributor Adrianisen. The reviewer is checking out Angry Birds 2 for the first time on the Galaxy S6 Edge, and points out some of the differences with the new game such as menu changes and other updated aspects.

On attempting to play Level 1 the differences become even more apparent with the reviewer having several questions about how to play the game and readily admitting he will need more practice. That may be the case but one thing that is clear is that the performance of Angry Birds 2 looks to be exceptionally smooth on the Galaxy S6 Edge and the graphics looks superb. All in all we’d say that Angry Birds 2 looks well worth trying out from what we’ve seen in the video, although it may take a little bit of time to get used to.

If you want to read more on Angry Birds 2, or for Google Play or App Store links, you might like to check out our launch article on the game. Meanwhile if you’d like to find out more about the Samsung Galaxy S6 Edge you can head to our previous articles on the phone from this page. If you’re about to check out Angry Birds 2 for the first time on the Galaxy S6 Edge or any other smartphone, do let us know what you think of it in the comments box below.