Samsung Galaxy Tab A 8.0 gets listed on T-Mobile 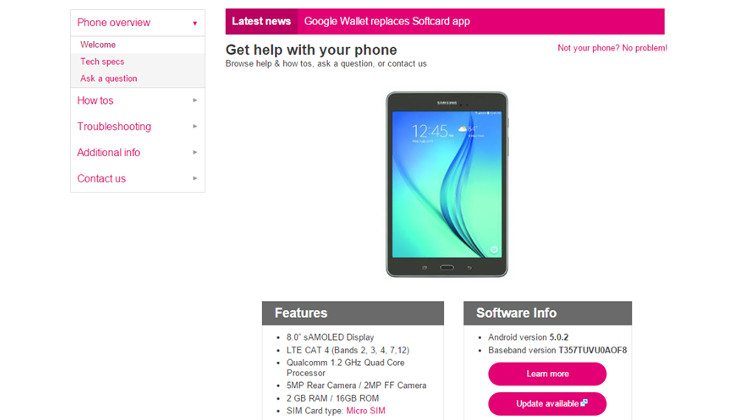 In July, we told you about a price cut for the Samsung Galaxy Tab A 8.0 in the states, and soon you may be able to get it even cheaper through T-Mobile. The slate has just shown up on Magenta’s official site, which means the LTE model of the Galaxy Tab A 8.0 is right around the corner.

T-Mobile has put up a product page for the Samsung Galaxy Tab A 8.0, but they haven’t put up a release date or a price just yet. It’s good news if you’ve been looking to pick up the cellular model of the tablet in the states, especially considering you’ll be able to get the cost tacked on to your bill which brings the initial cost down.

If you’re unfamiliar with the Samsung Galaxy Tab A 8.0, here’s the scoop. Samsung went with a new 4:3 aspect ratio for their new slate, but the resolution on the 8-inch panel is only 1,024 x 768. The processor running the show is a 1.2GHz quad-core chip, which is backed by 2GB of RAM. The internal storage is listed at 16GB and the camera combo clocks in at 5MP/2MP. Other specs will include a microSD card slot, 4G LTE, and Android 5.0.2.

While T-Mobile page didn’t give the full specs listing for the Samsung Galaxy Tab A 8.0, it should mirror the Wi-Fi model. The price is expected to be in the $275-300 range (unlocked) as well considering the Wi-Fi model is priced at $229.