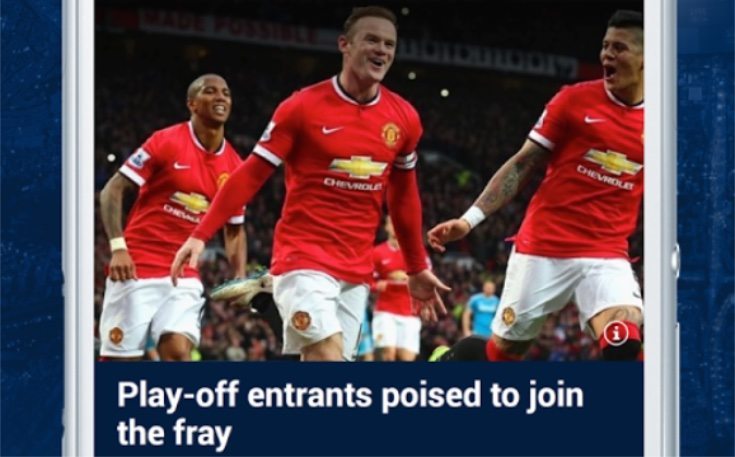 Champions League action tonight includes Club Brugge vs Manchester United in the second leg of the play-offs round. Kickoff time is 7:45pm UK time and the Red Devils take a 3-1 lead into this evening’s match after goals from Memphis Depay and Marouane Fellaini in the first leg. For Man Utd vs Brugge coverage you might like to check out the new official Champions League app.

Man Utd have their sights set firmly on reaching the group stage of the Champions League but the away goals rule might come into play as the Belgian side has a vital away goal. Fans are looking to club captain Wayne Rooney to make a return to goal-scoring form, and may also be hoping that Bastian Schweinsteiger keeps his spot in the starting lineup.

One of the most convenient ways of following football matches is with a mobile app, and the one we have details of today is free and available for iOS as well as Android devices. If you want to keep in touch with developments of Man Utd vs Brugge or want to supplement your TV viewing then this could be the app for you.

At Phones Review we have often used the UEFA.com app for Champions League match news, but now the Official UEFA Champions League app has just released on the App Store. Version 1.0 arrived on August 19th and can be downloaded from iTunes. It’s compatible with iPhone, iPod touch, and iPad running 7.0 or later. If you want the Android version of the Official UEFA Champions League app it can be downloaded from Google Play. It was updated on August 24th to version 1.1 and is compatible with smartphones and tablets running Android 4.0.3 or later.

The app offers plenty of features to give you comprehensive coverage of the Champions League, and users can select the club of their choice to receive content to a personalized newsfeed. It gives live audio commentary, live match statistics, team form guides, and highlights of every match, plus live draw coverage. The app also provides push notifications for fast information directly to your fingertips.

Remember this is a free app so you have nothing to lose by downloading it. Will you take a look at Man Utd vs Brugge coverage with this Official UEFA Champions League app? Tell us what you think of it in the comments box.