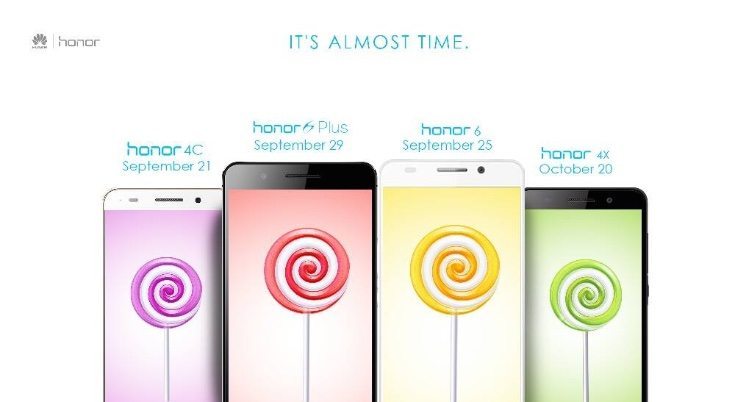 While many of us are gearing up for the release of Android 6.0 Marshmallow, there are plenty of device owners still waiting for Lollipop. There’s some good news today for some Huawei Honor smartphone owners though, as the company has now given information on the Huawei Honor 4X, 4C, 6 and 6 Plus Android Lollipop updates for India.

The fragmentation of the Android platform means that once a new update arrives it can take varying amounts of time to reach different devices and different regions. It may have seemed like quite a wait but users of the above Huawei Honor smartphones will be pleased to know that their handsets are finally going to receive the Lollipop update.

The Lollipop update for these devices will also bring Huawei’s Emotion UI 3.1, but sadly there’s no news yet on this upgrade for the budget Honor Holly and Honor 3C. Benefits of Android Lollipop include the new Material Design look with more responsive UI, improved notifications, increased security measures, flexible sharing, performance optimizations and much more.

If you are a Huawei Honor 4X, 4C, 6 or 6 Plus user are you pleased to hear that the Android Lollipop update is finally on the way for your device? We always appreciate your comments so do let us know.