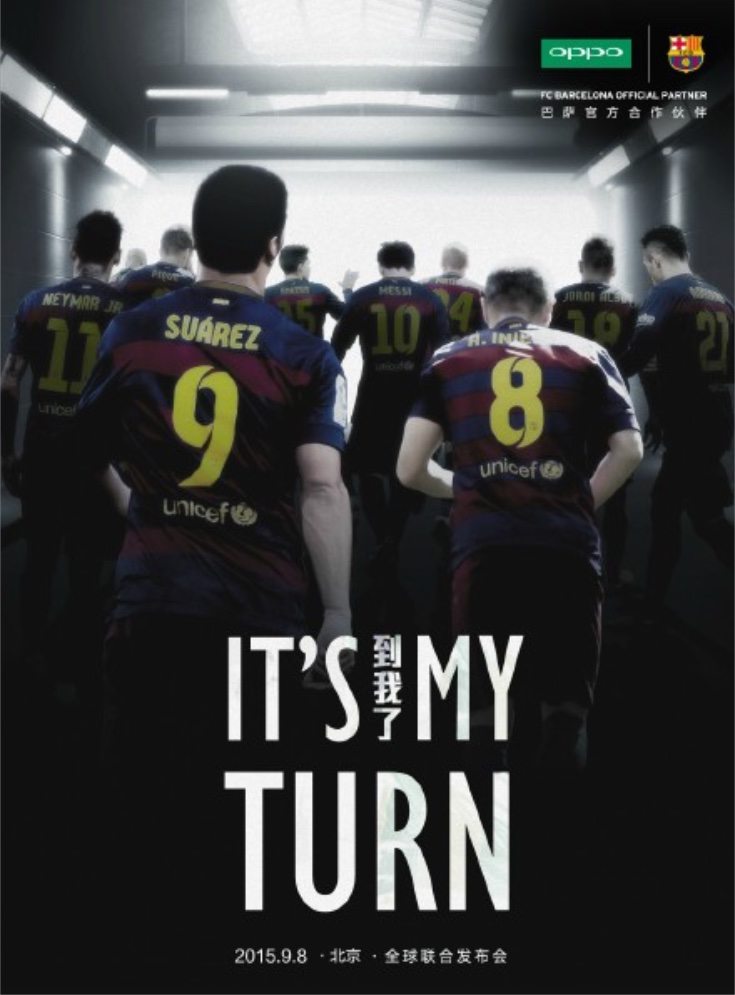 The Oppo R7 Plus is a high-end smartphone that released in May and there’s some rather interesting news about this device today. In June the Chinese smartphone manufacturer became an official partner of FC Barcelona football club, home of footballing superstar Lionel Messi. Now a special Oppo R7 Plus FC Barcelona Edition is being teased for a release.

Oppo has posted an image on its official Weibo account that shows a date of September 8. The image shows the backs of FC Barcelona players, Lionel Messi, Luis Suarez, Neymar, Andres Iniesta and others in their team kits. The only other thing revealed in the teaser are the words “It’s My Turn.”

This tantalizer is causing plenty of speculation from Oppo as well as Barcelona fans, and Chinese publications are suggesting it means an event on September 8 to unveil an Oppo R7 Plus FC Barcelona Edition. It’s thought this will have the same specs as the regular R7 Plus. However, as you might anticipate it would have the FC Barcelona logo on the reverse and some FC Barcelona extras in the way of the theme, packaging and wallpaper.

Given the fact that it will tie in with FC Barcelona and the huge popularity of the club worldwide, the special edition would be likely to release in markets outside China. There’s no news yet on whether the FC Barcelona Edition Oppo R7 Plus will be the same price as the standard R7 Plus or will have a premium on it, but it’s not much longer until September 8 rolls round when we should have all the relevant information.

As a refresher we’ll tell you that the regular Oppo R7 Plus has a Snapdragon 615 octa-core processor, Adreno 405 graphics, and a large 6-inch AMOLED display with Full HD resolution of 1920 x 1080. It has 3GB of RAM, 32GB of internal storage, and a sizeable 4100 mAh battery. There’s a 13-megapixel rear camera with laser autofocus, dual-LED flash, and 1080p video capture, as well as an 8-megapixel front-facing shooter. It runs the Android 5.1 Lollipop-based Color OS 2.1.

Are you pleased to hear about this likely arrival of an Oppo R7 Plus FC Barcelona Edition? Maybe you’re a fan of the club and are a prospective buyer of this smartphone?