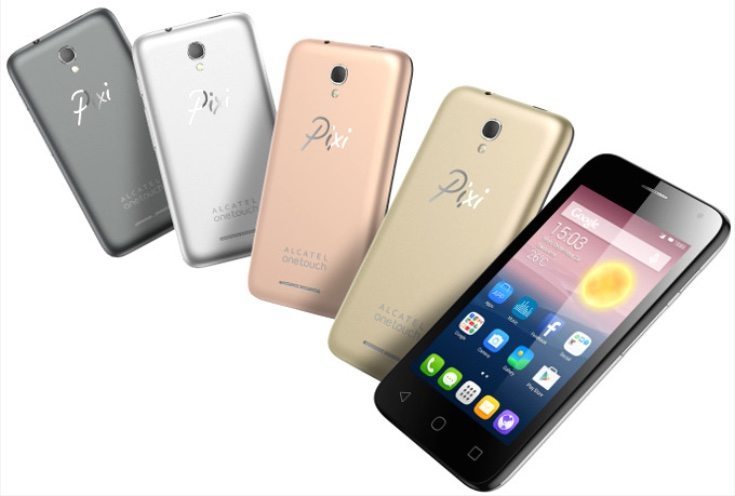 We’re seeing plenty of new smartphones revealed at IFA Berlin. Although the high-end devices often take all the headlines, we shouldn’t forget that there’s also a massive market for more affordable handsets. The Alcatel OneTouch Pixi First is a budget phone that will command a low price, and it has just been announced.

From the starting line we’ll say that nobody is going to get too excited about specs for the Alcatel OneTouch Pixi First. However, if you want affordability and don’t mind a smaller smartphone it could be the right one for you. The Pixi First is equipped with a 1.2GHz Spreadtrum 7731 quad-core processor and has a 4-inch display, which is unusually small for an Android phone these days. Screen resolution is 800 x 480.

Further Alcatel OneTouch Pixi First specs are 512MB of RAM, 4GB of internal storage (expandable via microSD), a 5-megapixel rear camera capable of 1080p video capture, and a 2-megapixel fixed-focus front-facing snapper. The dual SIM phone supports 3G and is juiced by a 1450 mAh battery, said to be good for up to 300 hours on standby or 7 hours or talk time.

It might be a small phone but it’s fairly thick at 9.7mm thick although Alcatel claims it to be “amongst the slimmest 4-inch handsets on the market.” The reverse of the device has a metallic appearance and color options are Metal Gold, Rose Gold, Metal Silver, or Soft Slate. Pricing hasn’t yet been announced, but looking at the specs tells its own story and you can expect a low price tag. It’s set to release soon and we’ll have give details of availability and price when we hear more.

If this new smartphone is released at the right price would you be interested in the Alcatel OneTouch Pixi First? What price do you think would be reasonable for this low-end handset? Do let us know with your comments.