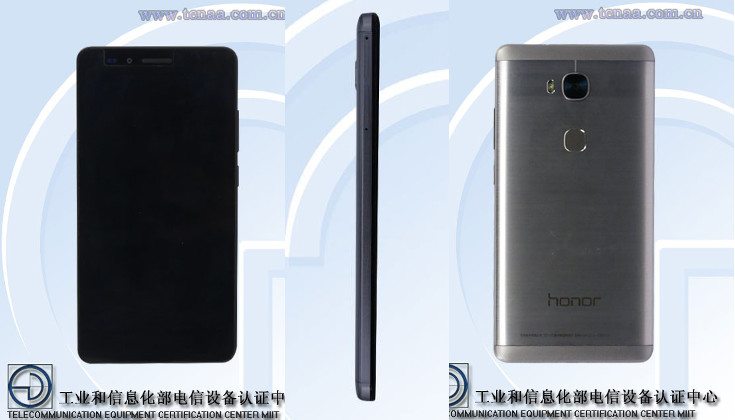 It’s hard to keep a secret in the smartphone world, and we’ve seen hundreds of handsets leak out through TENAA this year. The Huawei Honor 5X specs have become clear though the agency today, and the photos show a premium build that’s easy on the eyes.

While smartphone manufactures continue to debate between plastic or metal for their builds, Huawei opted for the latter with the Huawei Honor 5X. You can clearly see a metal shell on the handsets backside along with a fingerprint scanner, and overall it has a very clean look. While the measurements aren’t given, it also looks to have a slim profile.

The TENAA listing shows the Huawei Honor 5X to have a 5.5-inch display with a resolution of 1,920 x 1,080. Beneath the glass, you’ll find a 64-bit Snapdragon 615 coupled with 3GB of RAM while the storage capacity clocks in at 32GB. The rear camera is listed at 13MP and appears to have a Dual Tone flash and the selfie-snapper uses a 5MP sensor. All the usual connectivity options are present as well including Dual-SIM and 4G LTE.

The Huawei Honor 5X kind of came out of left field for us, so we’re unsure of when it will be released for the region. Considering the design and specifications, we could see a variant of the Honor 5X roll out to other regions where it would be popular if priced right.

How much would you shell out for the Huawei Honor 5X?