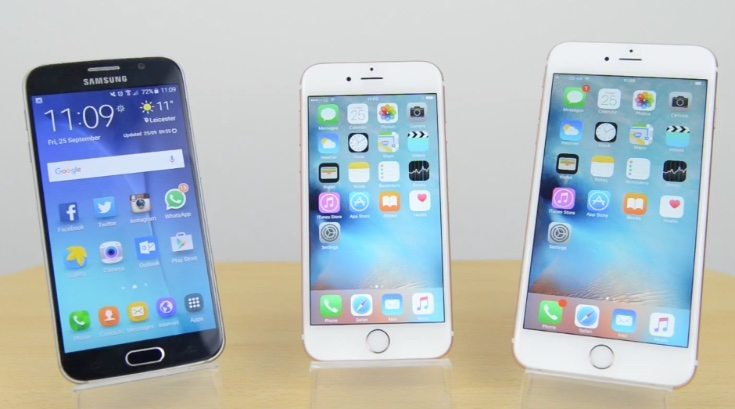 When highly anticipated top smartphones arrive it can be good to take a look at how the benchmark speeds compare with other popular devices. The Apple iPhone 6S and iPhone 6S Plus have just hit the shelves and one of the top rivals to these handsets is the Samsung Galaxy S6 that released earlier in the year. We’re sharing a video showing the iPhone 6S vs 6S Plus vs Galaxy S6 in a benchmark test and result.

On the other foot the Samsung Galaxy S6 has an Exynos 7420 octa-core processor, Mali-T760 MP8 graphics, and 3GB of RAM. It has a 5.1-inch display with resolution of 2560 x 1440 and runs the Android 5.1.1 Lollipop operating system. The short video that we’ve embedded below comes from SuperSaf TV and shows a Geekbench 3 test being conducted on the iPhone 6S vs 6S Plus vs Galaxy S6.

The speed test is run simultaneously (footage sped up) and the iPhone 6S gives a result in just 13 seconds while the iPhone 6S result is in at 16 seconds. The Galaxy S6 result is ready some considerable time later at 43 seconds, and the reviewer notes that the testing time of the iPhone 6S is the fastest he’d seen. Obviously the video also shows the result of the actual benchmark test.

We’re interested to see further different testing on the new iPhones and will bring you much more over the coming weeks. In the meantime what are your thoughts on this early benchmark result of the iPhone 6S vs 6S Plus vs Galaxy S6?