Xolo Black 1X is set to launch on October 28th 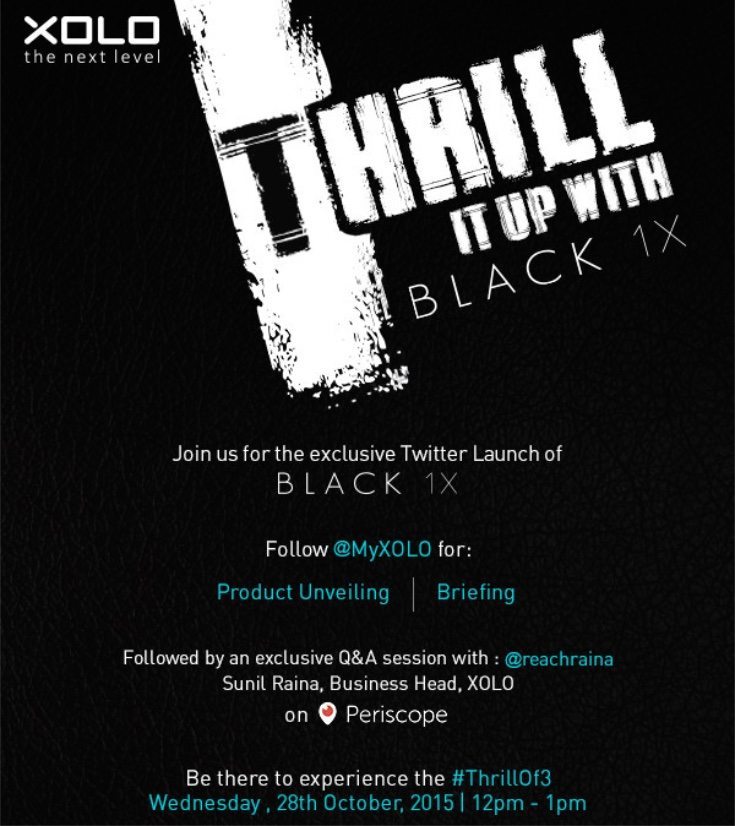 If you’ve been waiting for news on a new Xolo Black Series smartphone you only have a few more days to wait for official information on the phone. The Xolo Black launched in July with the Black series being a sub-brand of the well-known manufacturer. Now the Xolo Black 1X is set to launch on October 28th.

The manufacturer has sent out invitations for the Xolo Black 1X launch, although they obviously don’t give much information about the phone itself before the big day. The invite doesn’t give any specifics about the device but simply says “Join us for the exclusive Twitter launch of Black 1X.” The product unveiling and briefing will be available to follow with @MyXOLO on Twitter, and this will be followed by a Q&A session with Xolo Business Head Sunil Raina on Periscope.

The whole shebang takes place between 12pm and 1pm on Wednesday October 28th. GFXBench and Geekbench listings have already shown up some unofficial specs of the Xolo Black 1X. The phone is thought to have a 1.3GHz MediaTek MT6753 octa-core processor, Mali-T720 graphics, and a 4.6-inch display with Full HD resolution of 1920 x 1080.

Further specs are said to include 3GB of RAM, 32GB of internal storage, and 4G LTE support. The phone is likely to be running Android 5.1 Lollipop out of the box, and more specs include a 13-megapixel rear camera and 5-megapixel front-facing shooter. It’s also thought to be a dual SIM handset just as the original Xolo Black was.

Whether the Xolo Black 1X design will be close to that of the Xolo Black is not known at this stage, although we’re pretty sure it won’t be radically different. Once the phone launches on Wednesday we’ll be sure to bring information on the confirmed Xolo Black 1X price, specs, and hopefully a specific availability date.

Are you a fan of the original Xolo Black? Would you be interested in buying the Xolo Black 1X when it releases? Do let us know by dropping your comments in the box below.