We have seen a number of mini-consoles released over the past couple of years, and nobody has nailed it yet. The SlimPort Nano-Console is a different take on bringing your mobile to the small screen, and it’s currently winding down its funding run on the popular crowdfunding site Indiegogo.

There are countless ways to get media from your smartphone to your television set these days. Whether you go through a console like the Xbox One or have a streaming dongle like the Chromecast — if there’s a will, there’s a way. The SlimPort Nano-Console is a device that appeared earlier this year, and it’s a gadget that’s going to interest gamers and media freaks alike if you’re looking to integrate your mobile into your living room.

In a nutshell, the SlimPort Nano-Console is a cube that allows you to hook your smartphone or slate to your television set with as little hassle as possible. On the input side, it has a Slimport microUSB connector, a microUSB charging port and an HD Video port that supports 4K Ultra HD. There’s an additional HDMI port that allows you to connect additional devices as well, which is never a bad thing if you hate swapping cables out. 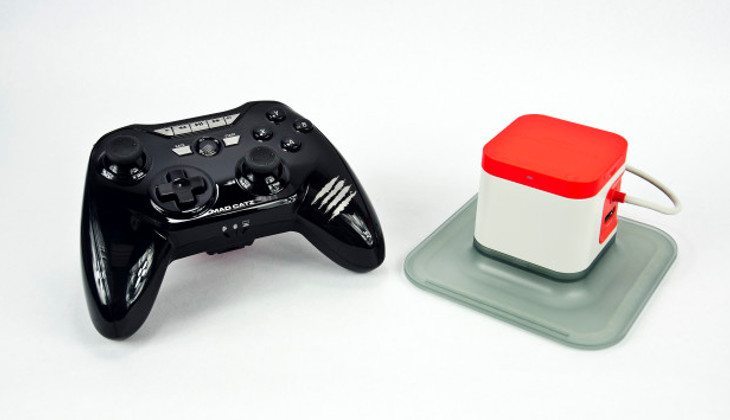 While the SlimPort Nano-Console is a simple-looking gadget, it comes with one cool feature — a Nano remote. The wireless remote is a little square that acts as a portable touchpad and allows you to swipe, drag, and tap till your blue in the face. Needless to say, you can sync up a gaming controller or Bluetooth keyboard up as well so you don’t have to deal with any extra cables.

The SlimPort Nano-Console is currently finishing up its run on Indiegogo where they hope to raise $10,000 to get the Nano-Console out on the streets. At the time of this writing, they have amassed around $7,000 but there’s still three days left in the campaign if you want to help them see the project through. There are still some ‘early adopter’ spots that let you snag a SlimPort Nano-Console for $34 (plus shipping), so if you are interested feel free to hit up the link below.