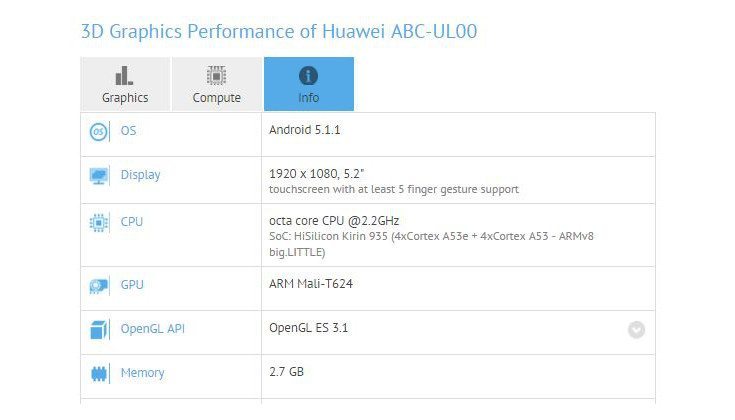 Not a week rolls by that we don’t see several unannounced smartphones trickle out. This week is no different, and a mysterious new device from Huawei has just shown up on a popular benchmark site with some very interesting specifications.

The unannounced Huawei smartphone has a codename that will probably give you pause, just like it did for us when we initially saw it. It’s dubbed the Huawei ABC-UL00, which isn’t all that unusual but not what we expected considering it’s believed to be the Honor 5X Plus. Names aside, the unannounced smartphone specifications are nothing to scoff at.

A HiSilicon Kirin 935 will power the Huawei ABC-UL00 along with 3GB of RAM. The power will push pixels to a 5.2-inch display with a resolution of 1,920 x 1,080, and there is a whopping 64GB of RAM lying under the hood. As for the snappers, you’ll get a 13MP camera on the rear and an 8MP sensor for selfies. Bluetooth, GPS, NFC and Wi-Fi are listed under the connectivity options, and it appears the model tested only sports a single SIM card slot.

Given the Huawei ABC-UL00 specs, it’s safe to say it should arrive with 4G LTE and Android 5.1 or higher. Pricing, availability and its final moniker are unknown at this time, but we’ll keep you in the loop as we learn more about the unannounced smartphone.