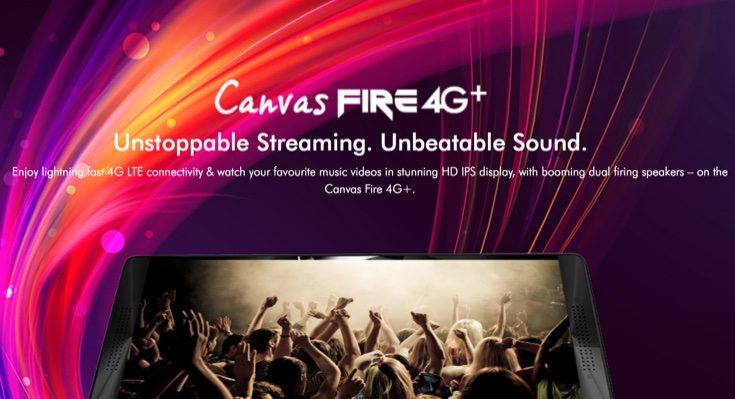 In September Micromax launched its Canvas Fire 4G (Q411) smartphone, and now a Micromax Canvas Fire 4G+ (Q412) is listed and on the way. It has several improved specifications over the standard version of the phone, and we have the details ahead. The price has not been announced yet, but as the phone now appears on the Micromax website we can expect an official launch soon.

This successor to the Micromax Canvas Fire 4G has a few similarities to the original Fire 4G but also several differences. Micromax Canvas Fire 4G+ specs include a 1GHz MediaTek MT6735P 64-bit quad-core processor, Mali-T720 graphics, and a 4.7-inch IPS display with HD resolution (1280 x 720). It has 1GB of RAM, and 8GB of internal storage that can be expanded with microSD card to 32GB.

The phone comes with pre-loaded apps that include Firstouch, Amazon, Scandid, and Clean Master, and it will be offered in a silver color. As a point of interest the standard Canvas Fire 4G has a smaller 4.5-inch display with lower resolution of 854 x 480, a 5-megapixel rear camera, and 2-megapixel front-facing shooter. It also has a lower capacity battery (1850 mAh), so the 4G+ steps up nicely in several aspects.

It will be interesting to see the price premium for the Canvas Fire 4G+ over the regular Canvas Fire 4G that launched at Rs. 6,999. It shouldn’t be too much longer until we can bring you that price news, so do check back with us from time to time. Could you be tempted to buy the Micromax Canvas Fire 4G+ depending on price?