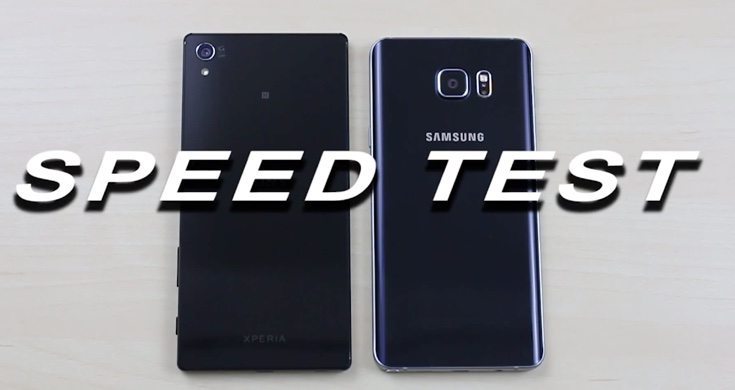 Key performance specs of the Galaxy Note 5 include an Exynos 7420 octa-core processor (four cores at 2.1GHz and four at 1.5GHz), Mali-T760MP8 graphics, and 4GB of RAM. This powers a 5.7-inch display with Quad HD resolution of 2560 x 1440, and the device runs the Android 5.1.1 Lollipop OS and should shortly receive the update to Android 6.0 Marshmallow.

The Sony Xperia Z5 Premium packs a Snapdragon 810 octa-core processor (four cores at 2GHz and four at 1.5GHz), Adreno 430 graphics, and 3GB of RAM. It has a 5.5-inch display with 4K resolution of 3840 x 2160, and it also released running Android 5.1.1 and has a planned upgrade to Android 6.0. For much more on either phone please check out our many other Note 5 and Xperia Z5 Premium articles at the links provided.

These are definitely top-flight smartphones so if speed performance is important to you, it’s worth watching the Galaxy Note 5 vs Xperia Z5 Premium video from L BS that we’ve embedded below that shows a gamut of various speed tests. Before the testing begins the heat output of both handset is measured and this is repeated later in the testing to see how they compare.

The video then shows different performance testing starting with an Ookla Speedtest, followed by web browsing, app opening speeds, scrolling, game loading, AnTuTu and Geekbench benchmarks, and more, and finally a bootup speed test. AS you view the 11-minute video you’ll see a counter clocking up for the winner of each test, and one of these devices far outshines the other in this testing. Of course we’re not going to give it away and ruin the suspense for when you watch the video?

When you’ve checked out the Galaxy Note 5 vs Xperia Z5 Premium speed testing comparison we’d really like to hear from you. Did you predict the victor would be the Samsung Galaxy Note 5 or the Sony Xperia Z5 Premium? Are you surprised (or not) by the overall winner of these tests? Do tell us by sending in your comments.