Xiaomi Mi 5 specifications get listed ahead of an official launch 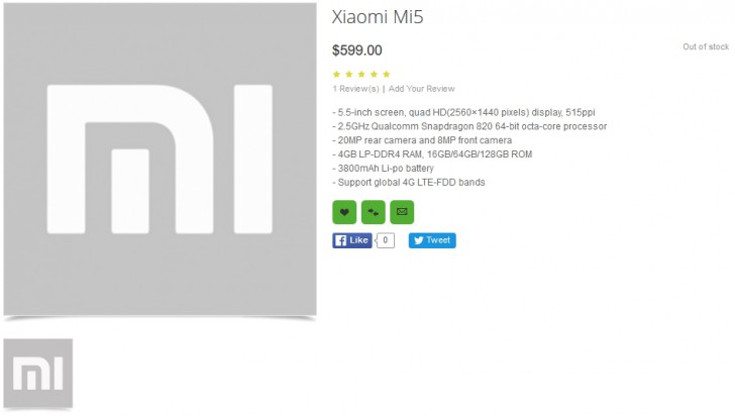 It’s getting common to see e-tailers leak handsets early and that’s what we’re dealing with today. The Xiaomi Mi 5 specifications are making the rounds again, but this time it’s through an online retailer that may have jumped the gun with a new listing.

We’ve covered a number of handsets that leaked early due to product listings on various websites. Oppomart has been the culprit behind many of these leaks, and they have struck again with a listing giving us the scoop on the Xiaomi Mi 5 specifications and its price.

According to Oppomart, the Xiaomi Mi 5 will be the beast we are all expecting with a 5.5-inch QHD panel and the octa-core Snapdragon 820 that’s clocked at 2.5GHz. The chip will get a bit of help from 4GB of RAM and you are going to have some options when it comes to internal storage. At the moment, the handset is listed with 16GB, 64GB, and 128GB of storage.

The rear camera on the Xiaomi Mi 5 is expected to be a 20MP sensor while the front-facing snapper is listed at 8MP. Connectivity options are up in the air, but it’s safe to say Dual-SIM, Wi-Fi, Bluetooth and LTE are locks. A large 3,800mAh battery will provide power to the device, and it will run MIUI 7 which is based on Android 5.1.

As is usually the case, the Oppomart listing is already down and while it didn’t have any photos, the Xiaomi Mi 5 was listed in Black and White. The Xiaomi Mi 5 price was set to $599 unlocked through Oppomart as well, but you’ll want to keep in mind the price and specifications could likely change before the Xiaomi Mi 5 release date.