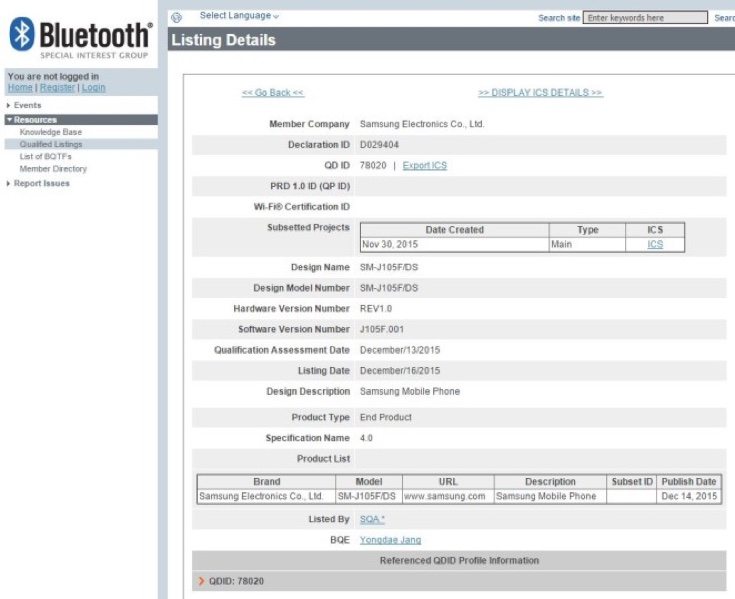 Many readers will be aware of Samsung’s budget Galaxy J1 that released early this year. In November we heard about an upcoming Samsung Galaxy J1 Mini and leaks suggest some upgraded specs over the standard version. Now the mini version of the J1 is a step nearer to launch following an appearance for Bluetooth certification.

Last month we reported on several leaks about the Galaxy J1 mini. It appeared in a benchmark spot revealing some of its specs, and the phone was also spotted on the chipset manufacturer’s site with model number SM-J105F named as the J1 mini. Further evidence came in the form of an import/export listing with units being imported for testing.

Now the Samsung Galaxy J1 mini has turned up for certification at the Bluetooth SIG, and once we see devices here we very often see them made official shortly afterwards. Unless you particularly want a low-end inexpensive phone the J1 mini won’t get you excited. However, leaked specs indicate some improvements over the current J1.

Unconfirmed specs of the dual SIM J1 mini are a 1.5GHz Spreadtrum SC8830 quad-core processor, a 4.3-inch display with resolution of 800 x 480, 1GB of RAM, and 8GB of internal storage. The camera set-up consists of a 5-megapixel rear unit and a 1.3-megapixel front-facing snapper, and the phone is running the Android 5.1.1 Lollipop OS. We haven’t seen any mention of the battery size just yet.

These unofficial specs are a step up in some areas from the regular Galaxy J1 that sports a 1.2GHz Spreadtrum dual-core processor, 512MB of RAM, and 4GB of internal storage. However the front-facing camera of the standard J1 is 2-megapixels.
The price of the J1 mini is unknown, but as we previously brushed on, it will be a low-cost handset. It will probably launch in India first before going on sale in some further markets.

Are you a potential purchaser of the Samsung Galaxy J1 mini that should launch soon? Maybe you think this is another example of Samsung confusing its offerings with yet another variant? Let us have your comments.