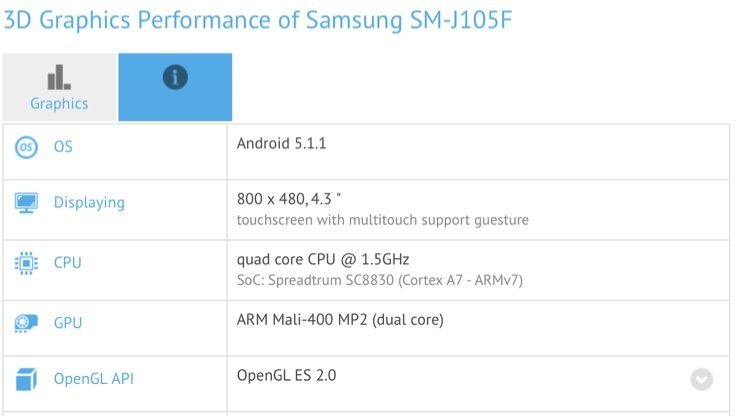 The Samsung Galaxy J1 is a low-end smartphone that released in February this year. Now a new variant is on the way, and Samsung Galaxy J1 Mini (SM-J105F) leaks have revealed specs and more of the upcoming device. Surprisingly this so-called ‘mini’ version has improved specs on the original.

Various leaks have turned up about an upcoming Samsung phone with model number SM-J105F, and one of them actually names this handset as the J1 Mini. The first sighting is for the SM-J105F in a GFXbench appearance, and it’s this leak that shows some specifications for the device. These include a 1.5GHz Spreadtrum SC8830 quad-core processor, Mali-400 MP2 graphics, and 4.3-inch display with 800 x 480 resolution.

Further specs of the device are 1GB of RAM, 8GB of internal storage, a 5-megapixel rear camera, and VGA front-facing snapper. It’s currently running the Android 5.1.1 Lollipop operating system. The next leak comes from the chipset manufacturer’s website, with some Spreadtrum code revealing that model number SM-J105F is the J1 Mini.

Finally the Samsung SM-J10F has turned up on Indian import/export site Zauba. This is often the source of first sightings of upcoming devices, and shows units being imported to India for testing purposes. Interestingly, this listing shows the device with a 4-inch display rather than 4.3-inches, and this seems more plausible given its ‘mini’ status.

The Zauba appearance also gives a unit worth of Rs. 3,368, which equates to around $50 or Â£33. We’ll point out that this is unlikely to represent the final price of the Samsung Galaxy J1 Mini when it launches and is merely an indicator. When we hear more information on this new Galaxy J1 version we’ll be sure to let you know.

In the meantime we’re interested to hear what you think about this news. Do you think there’s a place in the market for yet another Samsung Galaxy variant? Maybe you are a potential buyer of the Samsung Galaxy J1 Mini?