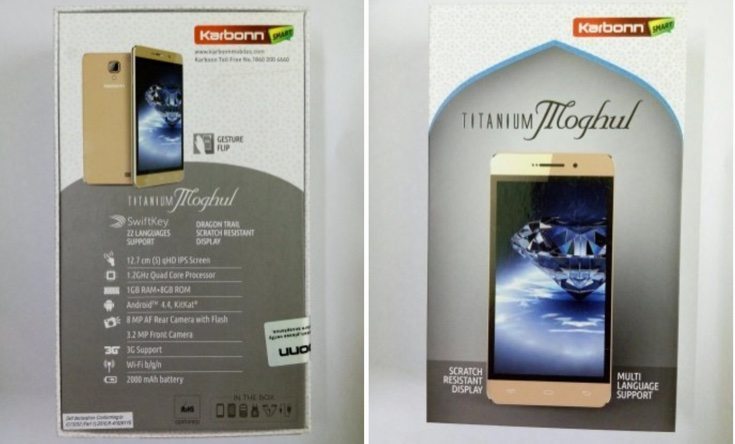 Another new smartphone from Karbonn has been spotted listed and while it has not been officially announced by the company it’s already available online and at offline stores. The Karbonn Titanium Moghul has low-level specs but a budget price tag that might make it appeal to some buyers. Read on for specifications, price and more.

The Titanium Moghul price is Rs. 5,399 and as you’d expect from the price you’re looking at a fairly basic handset. It has a plastic build with and the frame has a Chrome finish. The handset is available so far in a Blue color but a Champagne color is also expected soon.

Down to the nitty-gritty specs, and the Karbonn Titanium Moghul is powered by a 1.2GHz MediaTek MT6592 quad-core processor, and has a 5-inch IPS display featuring Dragontrail Glass for protection. It sports 1GB of RAM, 8GB of internal storage (expandable via microSD), and has a removable 2000 mAh battery.

Camera capabilities come from an 8-megapixel rear camera with autofocus and LED flash, while up front there’s a 3.2-megapixel front-facing snapper. It’s a dual SIM device with connectivity options of 3G, WiFi, Bluetooth, GPS, and microUSB 2.0. Sadly it lacks 4G LTE connectivity that features on some other budget smartphones.

Another drawback is that it runs the rather dated Android 4.4 KitKat operating system. Features include Gesture Flip, and there’s support for 22 languages with the pre-installed Swiftkey keyboard. Now that the phone has become listed online we expect to hear it made official very soon.

Is there anything about the affordable Karbonn Titanium Moghul that appeals to you apart from its low price? We always appreciate your comments so do send them in.