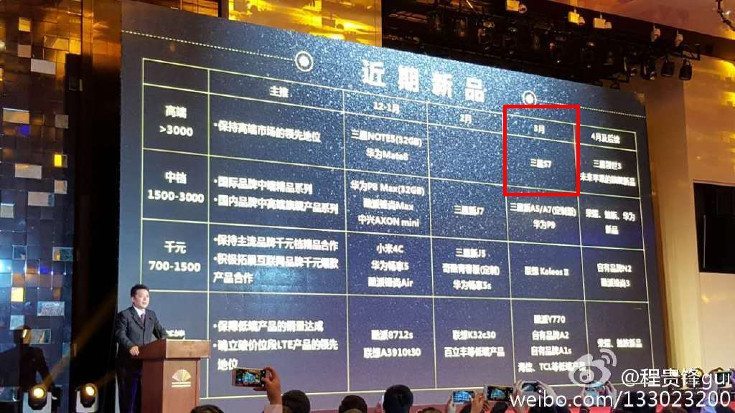 As long as smartphones still exist, Samsung is going to keep rolling out their annual flagship releases. The Samsung Galaxy S7 release date has been a hot topic over the past few months, and today we may have gotten official confirmation from an interesting source.

The Samsung Galaxy S7 release date has been rumored to arrive as early as January, but most signs point towards a release in February… if you believe the rumors. Sammy has been good about sticking to their release windows over the past few years, but we could see the Samsung Galaxy S7 release date arrive a bit early in some parts of the globe during 2016.

China Mobile recently held a presentation and someone was kind enough to snap a quick photo during the show. That photo says the Samsung Galaxy S7 release date will come in March for consumers with the carrier, and the Samsung Galaxy S7 price is mentioned as well at the equivalent of around $465. Normally, we would tell you to get your saltshaker out, but this is about as official as it gets although the pricing will vary by region.

While the Samsung Galaxy S7 release date rumors have been all over the place, it appears as if we’ll see the device in March with an official announcement coming in February during MWC. If that’s the case, you can expect to see the first batch of leaked photos and renders start to roll out in the coming weeks ahead.

Are you excited to see the Samsung Galaxy S7 release arrive or are you waiting for another manufacturer’s flagship?