Samsung Galaxy A9 specifications are official with China announcement 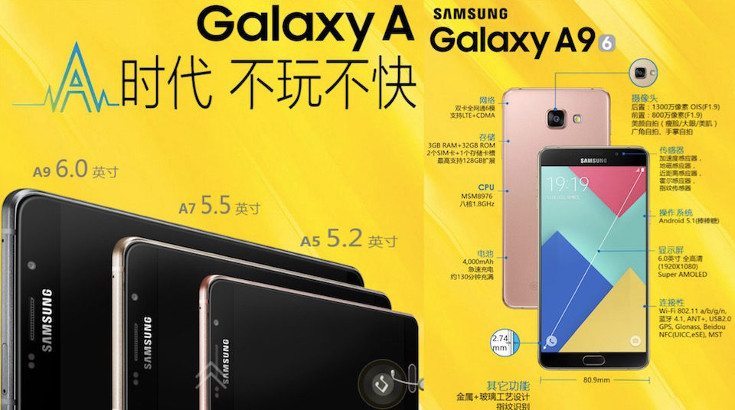 Samsung is one of the top smartphone manufacturers in the world, and that’s in part to the sheer number of handsets they’ve cranked out over the past few years. The Samsung Galaxy A9 specifications have made their way through the rumor mill several times, but today they have become official thanks to a big announcement in China.

Samsung took to the stage today in China where they showed off their latest smartphone while revealing the Samsung Galaxy A9 specifications to the world. It’s a large handset that walks the fine line between flagship and mid-ranger, but could prove to be a big hit if they price it accordingly with other smartphones in its range.

The Samsung Galaxy A9 specifications show a handset with a 6-inch panel sporting a resolution of 1,920 x 1,080. It’s not an “edged” device but does feature 2.5D curved glass to go along with an octa-core Snapdragon 652 and 3GB of RAM. The internal storage is listed at 32GB and expandable up to 128GB through the usual means.

On the backside of the Samsung Galaxy A9, you’ll find a fingerprint scanner and a 13MP sensor with an LED flash. The front-facing camera isn’t as fancy but will certainly get the job done at 8MP. Connectivity options include Bluetooth 4.1, NFC, Wi-Fi, ANT+ and Dual SIM. The handset will sip its power from a large 4,000 battery with fast-charging and runs Android 5.1.1 out of the box.

While the Samsung Galaxy A9 may not be a flagship, Samsung has made some additions that we would like to see in their next flagship with the big battery and microSD card slot. At the moment, there’s been no word on the Samsung Galaxy A9 price or availability, but it will roll out in Gold, Pink and White whenever it arrives.

What do you think of the Samsung Galaxy A9 specifications now that they are official?