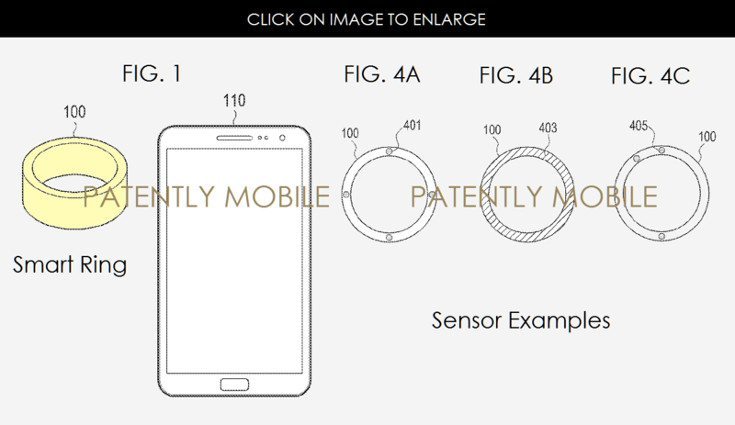 We may give Samsung a hard time about the number of variants and cookie-cutter smartphones they crank out, but the company has also been innovative. The Gear S2 shook thing up in the smartwatch world this year alongside the company’s edged series, but they may be gearing up for a new type of wearable with a Samsung Smart Ring.

Smart Rings are nothing new, even if you don’t know anyone who uses the tiny wearables. They don’t stick out like smartwatches or headsets, and while limited, they are about as discreet as you can get. It makes sense that Sammy would eventually dip their toes into those waters, and that’s what they are aiming to do with the new Samsung Smart Ring patent.

The Samsung Smart Ring will have embedded sensors that will allow its user to interact with their gadgets using their finger. While details are a bit sparse, one would assume you will use the ring as a remote control of sorts and it would obviously work alongside Samsung’s line of smartphones, tablets, and wearables. Obviously, being able to snap a photo by tapping the ring or flicking through channels with your finger would be a pretty cool trick.

Like most cool patents, there is a chance the Samsung Smart Ring will never see the light of day, but a betting man wouldn’t take that wager. Smart Rings will eventually be a “thing” as we look for new ways to control our gadgets (and homes), so we expect to see a lot of them as technology advances over the next few years.

Are you excited about the concept of a Smart Ring if handled properly?