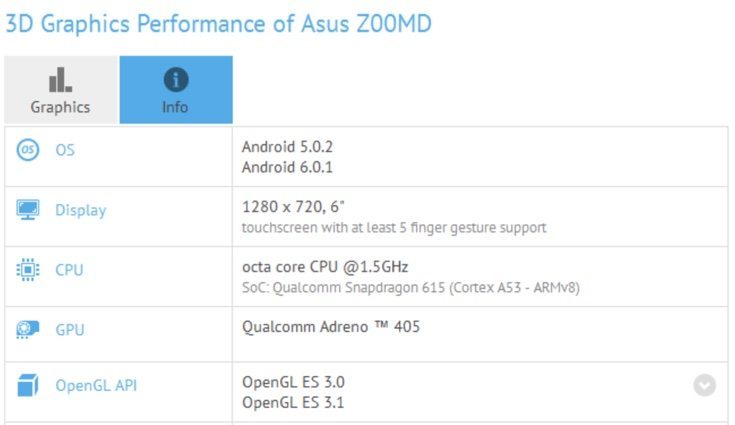 It’s always good to see different aspects of new devices revealed before they are official launched, and an Asus Z00MD benchmark sighting has uncovered some of its specs. It’s possible that this could be some kind of additional variant of the Asus Zenfone 2 Laser that released last year, although that’s not entirely clear at this stage.

The Asus Z00MD has appeared on the GFXBench database, a frequent source of information about upcoming devices. For example last month we found out some details of an upcoming Asus P008 ZenPad tablet from the same source, and now it’s the turn of the Z00MD phablet.

Further specs of the Asus Z00MD include a 12 or 13-megapixel rear camera and a 5-megapixel front-facing snapper, both with Full HD video capture. The GFXBench filing also shows it to be a single SIM device with WiFi, Bluetooth, and GPS support, but not NFC. It’s worth saying that the above specs have not been officially confirmed by Asus so you’ll want to bear that in mind.

As far as we can see there have been no leaks yet about when this phablet will release or the price, but we’ll bring more as we hear it. Many readers will know that MWC 2016 is set to take place in Barcelona later this month, and it could well be that we’ll see official announcements from Asus about new devices.

You can be sure we’ll let you know if one of them is this new Asus phablet so do check back with us from time to time. While we wait for more news we’d welcome your comments. Are you in the market for a new phablet such as the Asus Z00MD?